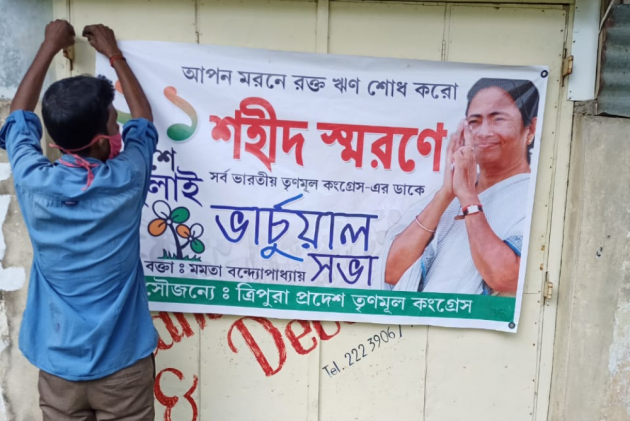 Trinamool Congress in Tripura is agog with excitement over the upcoming virtual address by party supremo and West Bengal chief minister Mamata Banerjee on the occasion of ‘Shahid Diwas’ (Martyr's Day) on July 21 when homage is paid to the party’s fallen workers.

State president Ashish Lal Singh said preparations were underway and party workers were enthusiastic about the “big day.” Huge posters and hoardings have been put up in the state capital Agartala and various other districts.

“There will be five giant screens with two in Agartala and one each in Dharamnagar, Ambassa and Udaipur,” Singh told the Outlook from Kolkata where he is visiting. “Our workers are excited and enthusiastic and cannot wait for the big day,” he said adding they were not worried about any resistance that might be put up to thwart their plan. What, however, might just play spoilsport is the ongoing Covid-induced curfew that begins at 2 pm since the programme is scheduled from 2 pm to 4 pm.

The party flag will be hoisted in every district office at 9 am.

“There is a groundswell of support building for the party and hundreds of workers of the BJP and CPI (M) have joined us over the past two months,” Singh said. “People have had enough of the ruling BJP in the three years since they have been in power and are now looking for a change which the TMC can provide,” he said.

“Our various frontal organisations are all handled by highly qualified people...we are not looking for run-of-the-mill politicians,” he said. The next assembly elections in the state are slated for early 2023. The BJP had ended the CPI(M)’s over two-decade-long rule in the state in 2018 when it swept to power.

However, reports do not speak well of the BJP rule with allegations of corruption and adverse law and order situations rampant. Besides, the party itself is said to be grappling with dissidence within a section of leaders said to be no longer keen on serving under chief minister Biplab Kumar Deb and want him replaced. The party’s central leadership had to depute a team last month to assess the situation, the report of which is still awaited.

The circumstances coupled with the TMC’s resounding victory in West Bengal may have spurred the party to believe that it stands a considerableble chance of turning the tables on the BJP in 2023. “We are confident of doing well,” Singh said.  “I don’t think there’s going to be any stopping us,” he said.