Former BJP MP from Chhattisgarh and also Union Minister of State, Bais was appointed Governor of Tripura in July 2019. 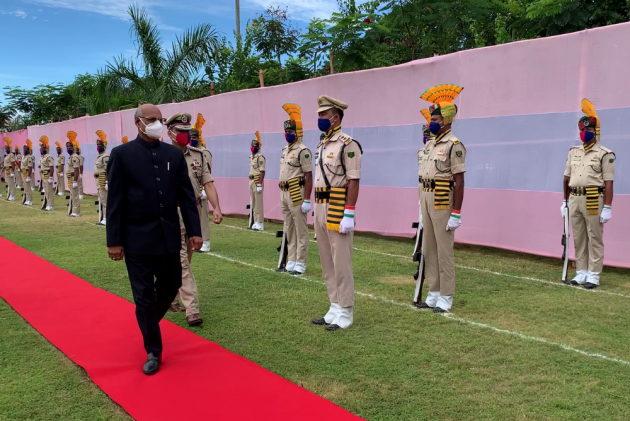 Outgoing governor of Tripura, Ramesh Bais was given farewell on Tuesday in the Raj Bhavan here in presence of Chief Minister Biplab Kumar Deb and his cabinet colleagues.  The guard of honour for Bais was organised by the Tripura State Rifles.  All Ministers bid him farewell with flower bouquets.

Speaking to reporters the outgoing governor said, “On July 29, 2019, I took oath as the Governor of Tripura. During these two years, I got an opportunity to serve the people of this small and beautiful state Tripura which has the blessing of Maa Tripurasundari. Even the day before yesterday I visited the Tripurasundari temple and prayed to the Mother goddess for blessing our leaders so that Tripura can develop.”

Bais further added, “During the last three years there have been several developmental activities in Tripura. Be it the Chittagong port, new railway connection via Bangladesh or the protocol route, all these roads of development are opening up. I am totally confident that very soon Tripura which was once considered as a landlocked state shall be a tourist destination in not only the northeastern region but the entire country.”

Former Bharatiya Janata Party MP from Chhattisgarh’s Raipur and also Union Minister of State in the second and third regime of former Prime Minister Atal Bihari Vajpayee, Bais was appointed governor of Tripura in July 2019 after Modi-led BJP formed government at the Centre for the second time.

He has now been appointed as the new governor of Jharkhand and will succeed Draupadi Murmu there.

Meanwhile, on Monday the newly appointed governor of Tripura, Satyadev Narayan Arya arrived here. He is scheduled to take oath on Wednesday.