Tripura To Get 18 Ekalavya Schools For Tribal Development 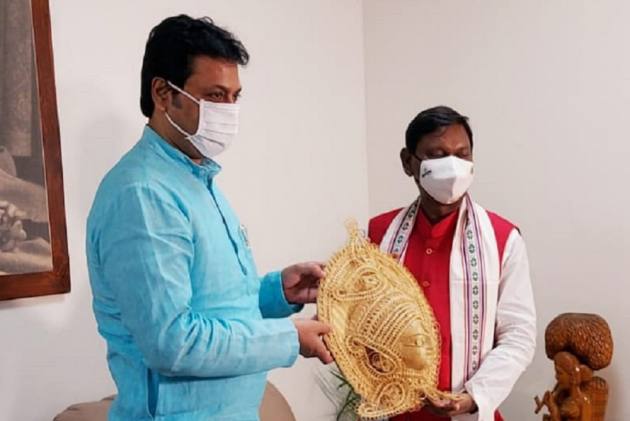 Union Tribal Affairs Minister Arjun Munda and Tripura Chief Minister Biplab Kumar Deb reviewed various ongoing activities and central schemes for the development of the tribal people of the state in a meeting at the secretariat in Agartala on Monday.

The meeting, held in presence of Tripura’s Tribal Welfare Minister Mevar Kumar Jamatia and other senior officials of the department concerned, lasted for an hour.

Later speaking to reporters, the Chief Minister said that a total of 18 Ekalavya schools have been sanctioned for Tripura and each shall come up at a cost of Rs 48 crores and already construction work for 15 schools is going on.

The union minister appreciated the role of the state government for appropriate implementation schemes for upliftment of the tribal people in various sectors like education, skill development, entrepreneurship, etc and for materializing the vision of Prime Minister Narendra Modi.

The union minister said that during the last two years his department has allotted 16 number of Ekalavya schools for the state of Tripura and already construction activities have started as the state government has provided land for these schools which shall help in providing education to tribal children living in the remote areas.

He viewed bamboo, food supplements and the herbal sector as having huge potential in Tripura.

The Union Minister said that at present his ministry is emphasizing on the newly launched Pradhan Mantri Aadi Adarsh Gram Yojana and he is visiting rural areas to inspect that the fund being disbursed by the central government is being utilized for the development of villages.

Meanwhile, Chief Minister Biplab Kumar Deb expressing his satisfaction over the meeting with the Minister said that the central government under PM Modi and Tribal Affairs Minister Arjun Munda is kind to sanction large number of Ekalavya schools for the tribal youths of Tripura and they shall be totally residential and functioning like Jawahar Navodaya Vidyalaya.