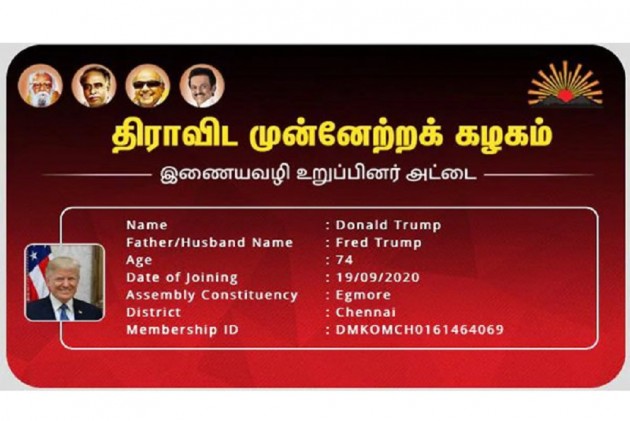 American President Donald Trump and Tamil Nadu Chief Minister Edappadi K. Palaniswami have become ‘members’ of the DMK. And they have membership cards to prove this.

Even DMK President M.K. Stalin’s estranged elder brother M.K. Alagiri has become a member of the DMK notwithstanding his expulsion from the party four years ago when his father Karunanidhi was the party president.

These VIPs could become ‘members’ of the Dravidian party due to the DMK’s latest online enrolment that allows anyone to apply online provided they have completed 18 years of age. Since the online membership form seeks only basic details and verification is only through an OTP, it is easy for anyone to provide a mobile number to generate a membership card.

The DMK had recently rolled out its “Ellorum Nammudam” (everyone with us) campaign to attract young voters and an intense digital campaign is being carried out across various websites and online publications. The main aim of the campaign is to rope in young voters into the party after the DMK’s poll adviser Prashant Kishor and his I-PAC team found that the party had very few members below 30. Even Stalin’s son Udhayanidhi, who heads the party’s youth wing is 42 years old. So the I-PAC team has devised the online membership drive with an eye on young voters ahead of the 2021 assembly elections. 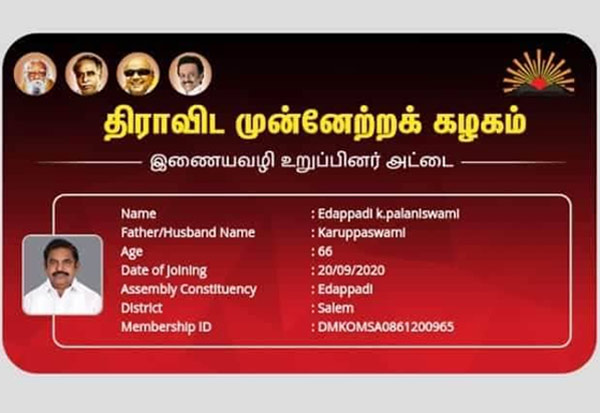 Party president Stalin claimed that the membership campaign had been a huge success with over one lakh new members joining in the first three days. The DMK’s website gives the latest count as nearly four lakh members in just ten days. Since anyone can apply to become a member a few pranksters have applied for membership of Donald Trump and EPS along with their photos and downloaded their membership cards thus raising doubts about the authenticity of the new entrants.

While it is not known who made Trump and EPS members of the DMK, the man behind M.K. Alagiri’s membership has owned up. Kapilan, a DMK member from Kanyakumari district and a staunch supporter of Alagiri, has disclosed that he applied for a membership in Alagiri’s name since he could not digest the fact that his leader had been expelled from the DMK. “Even after Alagiri had said he was willing to accept Stalin’s leadership he had been refused admission into the DMK. So I applied with all his details and mentioned his father as M. Karunanidhi. I even uploaded a photo of Alagiri and myself which has been printed in the membership card,” explained Kapilan.

Kapilan argues that since Alagiri was now officially a member of the DMK he can visit the DMK HQ in Chennai and even raise questions on the DMK Trust which controls the various assets of the party. “If they deny him that right then it proves that all the claims about the entire membership drive are fake,” claimed Kapilan. 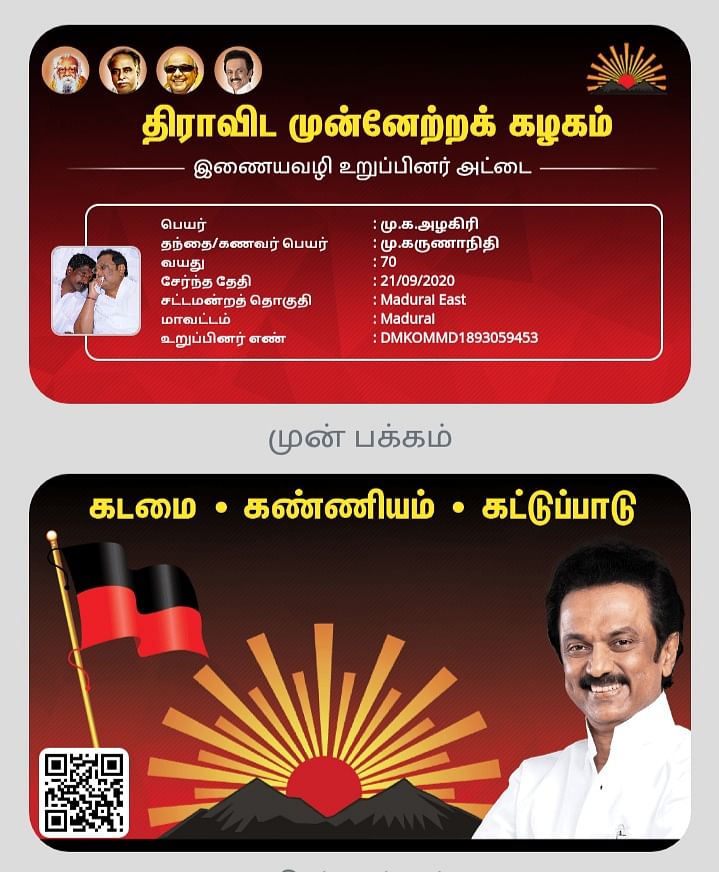 DMK’s spokesperson T.K.S. Elangovan when contacted admitted this problem about fake membership cards has been brought to their notice by many functionaries. “We are trying to rectify this. When the new applicants come to exchange their online membership card with an actual membership card we will ask for additional ID proof. Also local DMK functionaries would be asked to cross check the authenticity of the applicants at the booth level,” he said. The online drive is only to expand the party’s membership base, he clarified.