Home  »  Website  »  National  »  After A Rapturous Welcome In Ahmedabad, Trump To Wrap Up Business End In Delhi Today

After A Rapturous Welcome In Ahmedabad, Trump To Wrap Up Business End In Delhi Today

The chemistry between Modi and Trump was fully evident as the two leaders shared many hugs and heaped praise on each other in front of nearly 1,00,000-strong enthusiastic crowd at the new-look Motera stadium in Ahmedabad. 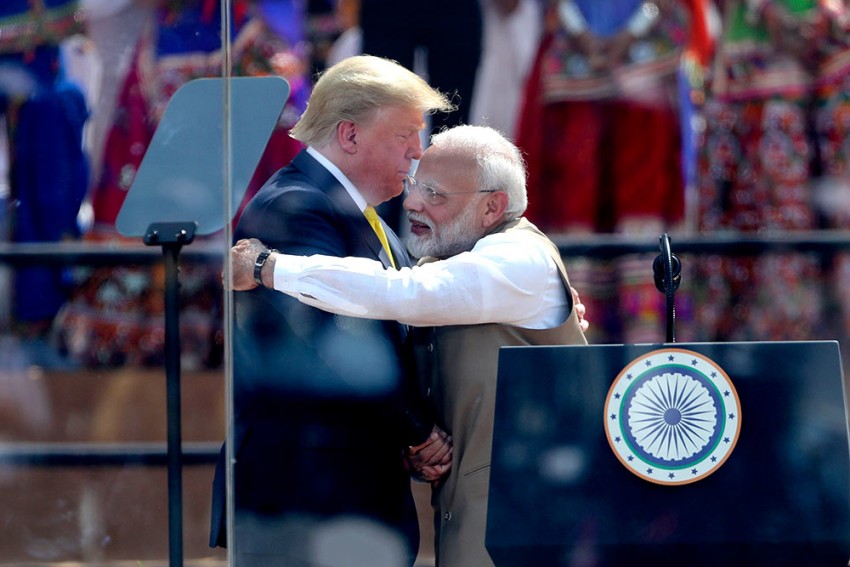 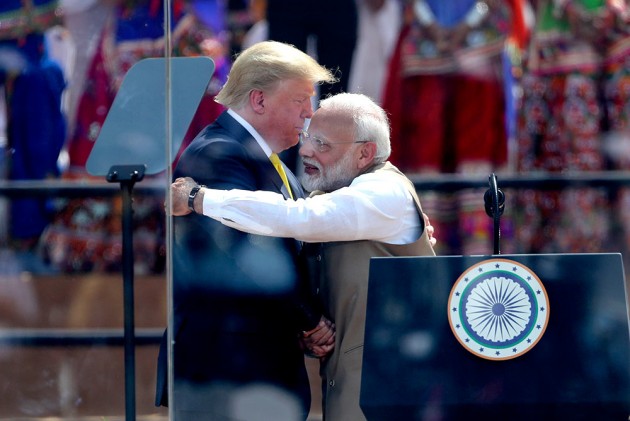 India and the US are working to defend their people from the threat of radical Islamic terrorism, boost defence cooperation and are negotiating a "fantastic" new trade deal, US President Donald Trump said on Monday, asserting that his country loves India and will remain its "loyal" friend.

In an address to a huge cheering crowd at the 'Namaste Trump' event in Ahmedabad, the US president, who arrived with his wife Melania and was received by Prime Minister Narendra Modi at the Sardar Vallabhbhai Patel airport, said his administration is working in a "very positive" way with Pakistan to crack down on the terrorist organisations that operate there.

Ahead of his official delegation-level talks with Modi in the national capital on Tuesday, Trump also announced that his country will sign defence deals worth $3 billion and asserted that the US looks forward to providing India with some of the "best and most feared military equipment on the planet".

The chemistry between Modi and Trump was fully evident as the two leaders shared many hugs and heaped praise on each other in front of nearly 1,00,000-strong enthusiastic crowd at the new-look Motera stadium in the Prime Minister's home state.

"Five months ago, the US welcomed your PM at a giant football stadium, and you welcomed us at the world’s largest cricket stadium. Thank you for spectacular welcome. We will always remember this remarkable hospitality forever", Trump said.

Known for his fondness to tweet, Trump also took to Twitter and tweeted messages in Hindi, including one expressing eagerness to visit India, to which Modi responded by tweeting the Sanskrit phrase, "Atithi Devo Bhava (the guest is god)".

India is always admired around the earth as the place where millions of Hindus, Muslims, Sikhs, Jains, Buddhists, Christians and Jews worship side by side in harmony as it has great tradition of embracing individual freedom, rule of law, dignity of every human being, Trump said.

"The first Lady and I have travelled 8000 mile around the globe to deliver the message to all citizens across this nation -- America loves India, America respects India, and America will always be a faithful and loyal friend to the Indian people," Trump said at the 'Namaste Trump' event in the presence of Modi, Melania, daughter Ivanka and son-in-law Jared Kushner besides top officials of the US administration.

During his nearly 30 minutes long speech, Trump also said,"while our nations have many differences, they are both defined and propelled by a fundamental truth -- the truth that all of us are blessed with divine light and every person is endowed with a sacred soul" and quoted Swami Vivekanand.

Trump also touched on India's cultural diversity and riches as he highlighted the success of its blockbuster movies like DDLJ (Dilwale Dulhania Le Jayenge) and Sholay, and its sporting icons like Sachin Tedulkar and Virat Kohli.

On his part, Modi welcomed Trump to "world's largest democracy" and said a "new history" was being created.

Modi said ties between India and the US are no longer just another partnership but have touched far greater heights.

Visit of President Trump to India with his family shows strong ties between India and the US, the prime minister added.

Earlier, thousands of people greeted Trump and his family as the presidential cavalcade criss-crossed the city roads leading first to Sabarmati Ashram and from there to Motera stadium.

At the Sabarmati ashram, Trump and his wife paid tribute to Mahatma Gandhi and tried their hands at the spinning wheel, also known as the charkha.

After addressing the crowd at the Namaste Trump event, Trump and Melania left for Agra to visit the iconic Taj Mahal. Accompanied by his daughter Ivanka and son-in-law Jared Kushner, the Trump family was welcomed by Uttar Pradesh Chief Minister Yogi Adityanath at the Agra airport.

"The Taj Mahal inspires all. A timeless testament to the rich and diverse beauty of Indian culture! Thank you India," Trump wrote in the message book.

The US President's visit to Agra and Taj generated huge excitement among local residents. Some shops have even displayed their own banners, welcoming Trump to India.

From the Kheria airbase in Agra, Trump's convoy of over 30 vehicles drove to Oberoi Amarvilas hotel near the Taj Mahal complex, as over 15,000 school students who lined up both sides of the route held US and India flags and cheered the US president as his motorcade passed by.

Extensive three-layered security was in place for his Agra visit, and authorities had got the Taj Mahal premises cleared of visitors by noon, hours ahead of Trump’s visit to the celebrated architectural landmark. Trump and his wife also posed for pictures for photographers. The couple spent about an hour at Taj to catch the sunset from the UNESCO heritage site, before leaving for Delhi.

Upon arrival in Delhi, Trump was greeted by another high level delegation including Union Minister for Civil Aviation, Hardeep Singh Puri.

During the second leg of his first official visit to India, Trump will be accorded a ceremonial welcome at the Rashtrapati Bhavan on Tuesday morning. Later, he will pay tributes to Mahatma Gandhi at Rajghat. Towards the end of his visit, Modi and Trump will hold restricted and delegation level talks at the Hyderabad House.