Greta Thunberg and Donald Trump were briefly in the same small room as they arrived for the summit, with a video showing the teen standing at one side of the room scowling at the president as he walked by her without any acknowledgement. 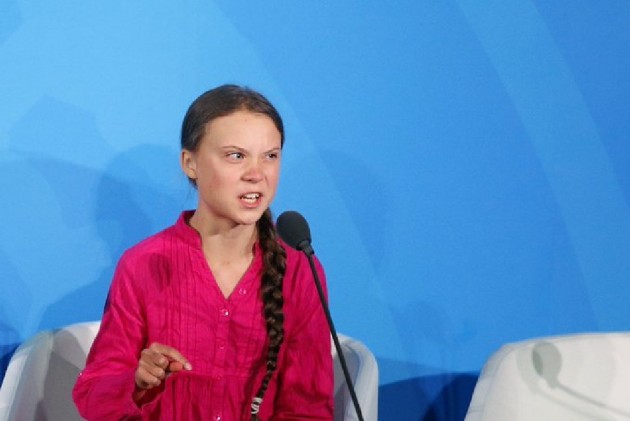 US President Donald Trump stirred up fresh outrage on social media Monday with a tweet mocking an impassioned speech made by 16-year-old activist Greta Thunberg at the UN climate summit in New York.

Her voice shaking with emotion in an address that was the defining moment of the summit, Thunberg accused world leaders of betraying her generation by failing to act on rising emissions, repeating the words "how dare you" four times.

Also Read: ‘How Dare You’: Greta Thunberg Thunders At UN

"You have stolen my dreams and my childhood with your empty words, and yet I'm one of the lucky ones," she said. "People are suffering. People are dying."

"She seems like a very happy young girl looking forward to a bright and wonderful future. So nice to see!" climate-skeptic Trump tweeted a few hours later, alongside a clip of the speech.

The trolling of the teen activist -- who suffers from Asperger's syndrome, a mild form of autism -- racked up more than 16,000 responses in three hours, many of them attacking the US president.

She seems like a very happy young girl looking forward to a bright and wonderful future. So nice to see! https://t.co/1tQG6QcVKO

Thunberg and Trump were briefly in the same small room as they arrived for the summit, with video showing the teen glowering at the president as he passed by with his entourage.

Thunberg has become the global face of a growing youth movement against climate inaction that mobilized millions in a worldwide strike on Friday.

Her struggle began quietly in August 2018 when she skipped school for the first three weeks, and then on Fridays to spend the day outside Sweden's parliament with a sign labelled "School strike for climate".

In August, she crossed the Atlantic in a two-week journey on a sailboat to attend the climate summit in New York. She refuses to fly because of the carbon emissions caused by planes.