Bennicks and his son Jeyaraj were taken to Sattankulam police station in Tamil Nadu for allegedly violating lockdown norms in June, and died in a local hospital days later. 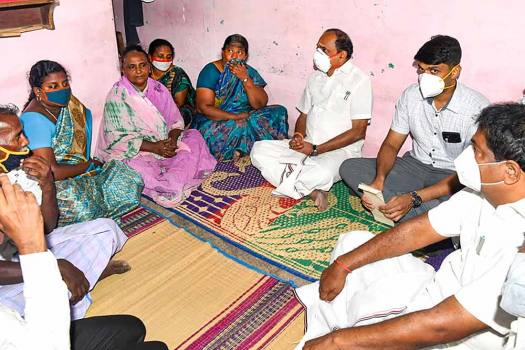 The CBI chargesheet filed against the nine police officers involved in the death of father-son Jayaraj and Bennicks at the Sattankulam police station in Tamil Nadu has stated that material evidence collected from the station premises had established that “brutal torture” was inflicted upon them.

“It is evident from the expert opinion of CFSL, New Delhi that the blood available on the material objects seized from the police station Sathankulam - wooden lathis used by the accused persons for brutal torture of both the deceased and the bloodstains exhibits collected from the walls and floor of PS Sathankulam by FSL during judicial inquiry contain the blood of the deceased Bennicks and Jeyaraj on the same,” the chargesheet said.

“Thus, the fact that deceased Bennicks and Jeyaraj were subjected to brutal torture by the accused police officials in the evening of 19.06.2020 and the intervening night of 19.06.2020 in the police station Sathankulam, stands established,” read the chargesheet. It added that both Jeyaraj and Bennicks were tortured inside the police station between 7:45 pm on June 19 and 3 am the next day.

The chargesheet further detailed how the two were subjected to several rounds of beatings with policemen holding their hands and legs while blows were rained on their backsides. The station’s inspector S. Sridhar was charged with repeatedly instigating his subordinates to beat the father and son even more severely, whenever there was a lull in the torture, the CBI stated.

The chargesheet also blamed doctors of the Kovilpatti government hospital for certifying that the two were fit to be lodged in the local jail in spite of severe bleeding injuries that had forced the police to get them to change their clothes at least two times. The final post-mortem report furnished by the team of three doctors established that the deceased “Bennicks died of complications of blunt injuries sustained," states the report.

Bennicks and Jeyaraj died on June 22 and 23 respectively at a government hospital after being taken from prison in Kovilpatti town after complaints of health issues. The two were taken to the Sathankulam police station for allegedly violating lockdown curfew norms.