Ratan Chakraborty, former All India Trinamool Congress (TMC) president of Tripura who at present is a BJP MLA, also alleged that the TMC is trying to forge possible alliance with CPIM to stop BJP in the state. 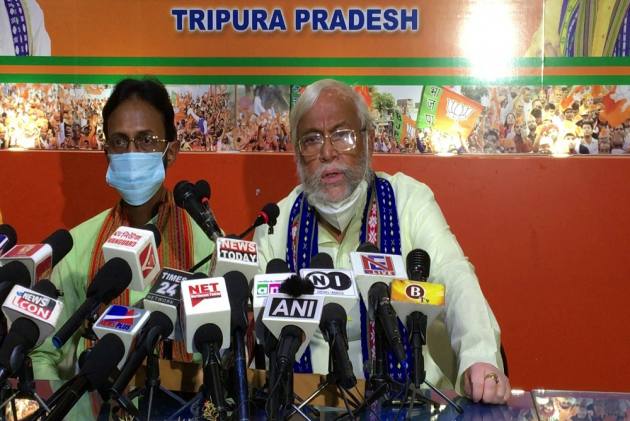 Former All India Trinamool Congress (TMC) president of Tripura who at present is a BJP MLA in the Biplab Kumar Deb led government here alleged that despite the people of the state giving opportunities, Mamata Banerjee’s TMC had twice failed in Tripura earlier as the leadership from West Bengal were not keen to the cause of the people and only interested in securing six percent vote share in order to save its tag as an all India party.

The allegation has been made by veteran politician Ratan Chakraborty who was a Minister in Congress-TUJS government and later joined the TMC but before the crucial 2018 assembly election shifted to the BJP and was elected as an MLA.

Later during a press conference in the Agartala press club they alleged that democracy is at stake in Tripura under BJP rule which is trying to throttle the voice of people and which is proven from the incident of not allowing the IPAC team to come out of the hotel. It only reflects the fear, trauma and agony of the party in power here, the said.

Chakraborty alleged that the local TMC leaders were ignored and disrespected by Mamata Banerjee who even during her stays at Agartala state guest house refused to meet with a single local leader of her party.

According to the former TMC Tripura president, Mamata Banerjee and the top TMC leadership of Bengal like earlier have now again started focusing on Tripura to obtain the requisite six percent vote share of the state and which is necessary to save the all India party status of the party but they do not care about the people of Tripura.

Chakraborty said that TMC is trying for a new possible alliance with the CPIM in Tripura to oppose the BJP and which has been hinted by the TMC leader on Wednesday.

He added that TMC is scared and apprehending that if IPAC members are stopped from conducting the survey then it shall directly reflect in the party's possible prospect in Tripura but unfortunately the people of the state had already tested and rejected TMC twice earlier and so they have no future here.

Other leaders present at the press conference in BJP headquarters in Agartala were its two spokespersons - SubrataChakraborty and Nabandu Bhattacharjee.