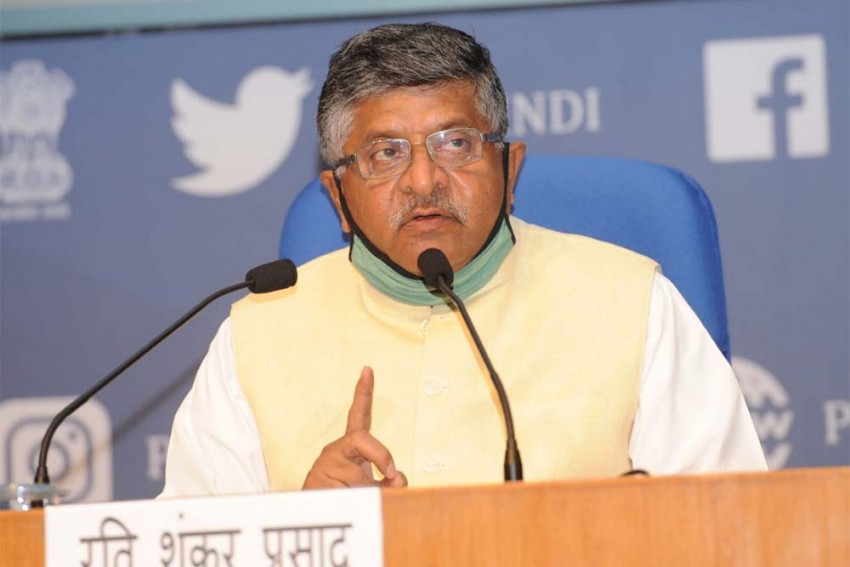 Twitter on Friday blocked IT Minister Ravi Shankar Prasad's account for one hour alleging violation of the US Copyright Act.

Prasad in a series of posts on another social media platform Koo said that Twitter's action is in gross violation of IT rules, as the platform had failed to give prior notice before denying access to his account.

Confronting Twitter, Prasad said it was apparent that his statements calling out the high handedness and arbitrary actions of the microblogging platform, particularly sharing clips of interviews to TV channels and the powerful impact had "clearly ruffled its feathers".

"Friends! Something highly peculiar happened today. Twitter denied access to my account for almost an hour on the alleged ground that there was a violation of the Digital Millennium Copyright Act of the USA and subsequently they allowed me to access the account," Prasad said.

Soon after Prasad flagged the issue, Congress leader Shashi Tharoor tweeted that he too had faced something similar.

"Raviji, the same thing just happened to me. Clearly DMCA is getting hyperactive. This tweet has been deleted by @Twitter because its video includes the copyrighted BoneyM song `Rasputin'," Tharoor tweeted.

Tharoor further said: "As Chairman of the Parliamentary Standing Committee on Information Technology, I can state that we will be seeking an explanation from @TwitterIndia for the locking of @rsprasad's & my accounts & the rules & procedures they follow while operating in India".

The temporary locking of the IT Minister's Twitter account comes at a time when the US digital giant has been engaged in a tussle with the Indian government over the new social media rules.

The government has slammed Twitter for deliberate defiance and failure to comply with the country's new IT rules, which has led to the microblogging platform losing its legal shield as an intermediary in India and becoming liable for users posting any unlawful content.

"It is apparent that my statements calling out the high handedness and arbitrary actions of Twitter, particularly sharing the clips of my interviews to TV channels and its powerful impact, have clearly ruffled its feathers," the minister said.

He went on to say that it is now obvious why Twitter is refusing to comply with the intermediary guidelines and added "because if Twitter does comply, it would be unable to arbitrarily deny access to an individual's account which does not suit their agenda".

Twitter's actions are in gross violation of the IT rules, where they failed to provide any prior notice before denying access to the account, the minister pointed out.

"Twitter's actions indicate that they are not the harbinger of free speech that they claim to be but are only interested in running their own agenda, with the threat that if you do not toe the line they draw, they will arbitrarily remove you from their platform," Prasad said.

The minister made it clear that platforms will have to abide by the new IT rules fully and warned that there will be no compromise whatsoever.

In a statement, Twitter spokesperson, said, “We can confirm that the Honourable Minister's account access was temporarily restricted due to a DMCA notice only and the referenced Tweet has been withheld. Per our copyright policy, we respond to valid copyright complaints sent to us by a copyright owner or their authorised representatives".

But IT Ministry sources claimed that it was obvious that Twitter was not comfortable with the minister's posts, criticising the platform for non-compliance with the IT Rules and hence it threatened the IT Minister by denying access to his account for about an hour for alleged violation of copyright law of the US.

The issue that further needs to be deliberated in this context is whether India should be guided by the US copyright laws or its own copyright laws, they argued.

The sources questioned how a multinational platform like Twitter, which proclaims itself as the flag bearer of free speech, can invoke American laws in India to curtail the free speech of a senior minister of the government.

Under the DMCA copyright, owners can notify Twitter claiming that a user has infringed their copyrighted works, the message read.

"Upon receipt of a valid notice, Twitter will remove the identified material. Twitter maintains a repeat copyright infringer policy under which repeat infringer accounts will be suspended. Accruing multiple DMCA strikes may lead to suspension of your account," the message said.

It further said, "In order to avoid this, do not post additional material in violation of our Copyright Policy and immediately remove any material from your account for which you are not authorised to post”.

It is pertinent to mention here that Twitter has not fully complied with the new rules, called intermediary Guidelines, that mandate setting up a grievance redressal mechanism and appointing officers to coordinate with law enforcement.