The incident comes a day ahead of the commencement of Aero India Show in Bengaluru on Wednesday. 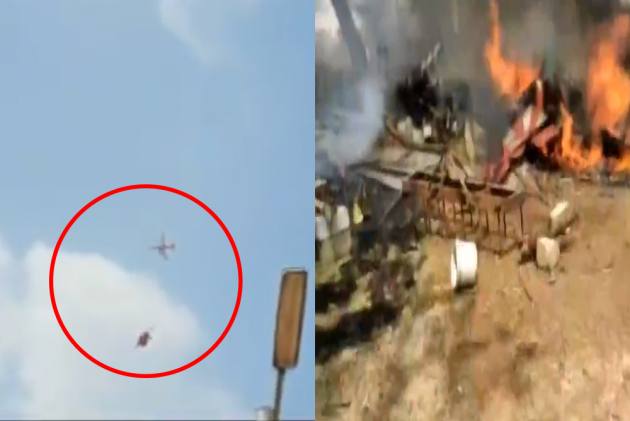 One pilot was killed and two others injured after two aircraft of IAF's aerobatic team Surya Kiran crashed near the Yelahanka airbase in Bengaluru on Tuesday, a day before the opening of the Aero India show.

Video clips of the incident showed the two jets crashing to the ground and bursting into flames after brushing against each other mid air, a day ahead of the five day event.

Thick black plumes of smoke were seen billowing from the mishap site moments later, with a man in the video yelling "Oh my God, oh my God."

The Hawk jets were performing a manoeuvre when one was flying inverted carrying a pilot and the other below it with two pilots moments before they hit each other and spun out of control, according to police and eye witnesses.

Both aircraft then came crashing down in a bushy area in a residential layout, but none of the local population was injured, police said.

The incident occurred at around 1150 hrs while practising for the air show, the Defence PRO office said in a statement.

One of the three aircrew of the aircraft, Wg Cdr V T Shelke and Sqn Ldr T J Singh ejected.

The two aicrew have been airlifted to air force command hospital, Bengaluru, it said.

A Court of Inquiry will investigate the cause of the accident, the statement said.

"I'm aware of it (incident)," Defence Minister Nirmala Sitharaman said, but did not elaborate further when asked about the accident on the sidelines of an event in Bengaluru.

Sitharaman is slated to inaugurate the five-day biennial event organised by the Ministry of Defence at the Yalahanka air base, north of Bengaluru.

Soon after the mishap, Bengaluru Commissioner of Police T Suneel Kumar said the crash occurred at the ISRO layout and that 'minor damage' has been caused to a house nearby that had no inmates.

Both the aircraft were reduced to a mangled heap.

"We were watching the manoeuvre. The aircraft took off and after some time, they brushed against each other while performing a manoeuvre and crashed. We heard a loud noise," Chetan, an eyewitness, said.

He said soon after the crash, about 100-150 people rushed to the site and tried to help the injured pilots.

"I held the hand of a pilot and tried to comfort him. He was calm. He was conscious and was responding," Chetan said, adding, that the injured pilots were thereafter shifted to hospital by authorities.

The tragedy, just a day before Asia's premier air show is to commence, comes about three weeks after a Mirage-2000 trainer aircraft of the IAF crashed at the Hindustan Aeronautics Limited Airport in Bengaluru on February 1, killing both pilots.

A Jaguar aircraft had crashed on January 28 at Kushinagar in Uttar Pradesh and the pilot had ejected safely.

'Surya Kiran' (ray of the Sun), with its breathtaking manoeuvres and formations, is always a major attraction in Aero India shows.

The aerobatic team was formed in 1996 as partof the 52nd Squadron of the IAF.

The team initially used Kiran Mark II (HJT-16) built by HAL before switching over to Hawks.

Also known as "The Sharks", the Surya Kiran team, which has performed in air shows across the world, is based at Bidar in north Karnataka.