Soon after the attack, a massive search operation has been launched by the security forces. 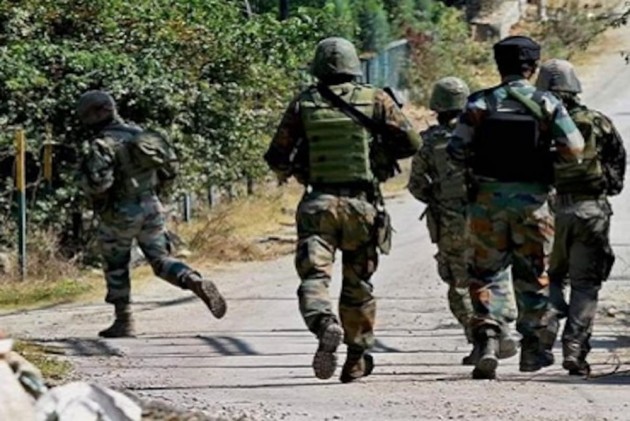 The injured include an assistant sub-inspector of the Central Reserve Police Force (CRPF), they said.

Militants fired upon a security forces party near Kandizal Bridge in Nowgam, Srinagar this afternoon, a police official said.

He said five CRPF personnel, including an ASI, were injured in the firing.

The injured personnel were taken to the Army's 92 base hospital, where the doctors declared two of them -- Constables Shalinder Pratap Singh and Devndra Kumar Tripathi -- brought dead, the official said.

He said the other three personnel -- ASI Gorakh Nath, Constable Kirgain and Constable James -- are undergoing treatment and their condition is stated to be stable.

The militants fled the spot after the attack. Soon after the incident, the area was cordoned off and a manhunt was launched to nab the attackers. Senior officials also rushed to the spot.

Speaking to reporters, Inspector General of Police (IGP), Kashmir, Vijay Kumar said the attack was carried out by two LeT militants who have been identified.

"Two militants from Lashkar-e-Toiba came on a motorbike and fired indiscriminately on the CRFP Road Opening Party using AK-47. The forces retaliated and there was heavy cross-firing. The militants were successful in escaping, but we have identified them and will soon neutralise them," the IGP said.

He said one of the militants has been identified as Saifullah, a Pakistani militant, and the other is a local.

"Saifullah was involved in an attack on CRPF in Chadoora in which an ASI was martyred. He was also involved in firing in Nowgam. This is his third attack and we will neutralise him soon," Kumar said.

He said that militants find it easy to target security forces on the highway.

"The national highway is a target and a vulnerable place but because many civilian vehicles pass every day, our forces face difficulty in retaliating. If we retaliate and fire indiscriminately too, there will be civilian causalities. So we have to take preventive measures," the IGP said.

"Militants do not announce that they are coming for an attack, they come by concealing their weapons, come close and then fire. They attack like guerrilla warfare, but we have a solution to this and we will soon neutralise them in an encounter," he said.