Among those advising him on the pandemic are Dr Vivek Murthy, and Harvard economist Raj Chetty is among those who have briefed Biden on economic issues. 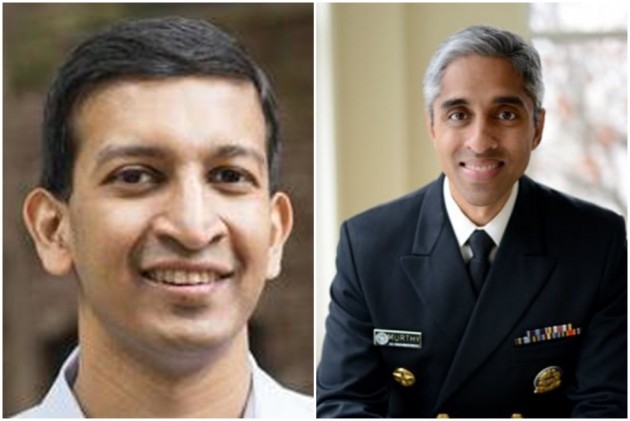 Two prominent Indian-Americans are among Democratic Presidential nominee Joe Biden’s "core advisers" who have been guiding him on issues ranging from the coronavirus pandemic, economic recovery to foreign policy and climate change, a media report said.

Biden, “plotting an ambitious presidency that would begin amid twin health and economic crises, is leaning on veteran advisers with high-level governmental experience rather than outsiders and ideological rivals to help guide him on subjects including the coronavirus pandemic and the country’s diminished standing in the world,” a report in The New York Times said.

Among those advising him on the pandemic are Dr Vivek Murthy, former US Surgeon General who was appointed by President Barack Obama and Harvard economist Raj Chetty is among those who have briefed Biden on economic issues, the report said.

Murthy and former head of the Food and Drug Administration David Kessler were among those present on a conference call convened by the Biden campaign when it learned that two people who had travelled with Senator Kamala Harris had tested positive for the coronavirus.

“Biden has spoken often of his briefings with experts, and Dr Murthy and Dr Kessler have been two of the most prominent medical figures whose counsel Biden has sought during the public health crisis,” the NYT report said.

The NYT report quoted Kessler as saying that in the early days of the pandemic, he and Murthy would brief Biden "every day, or four times a week.”

“We would send in 80- to 90-page documents, take him through the epidemic from epidemiology, therapeutics, vaccines, testing. Staff would join, originally by phone but they soon shifted to Zoom,” Kessler said, according to the NYT report.

“The docs,” as Biden calls Kessler and Murthy, also “pore over research and data on the virus and consult with modelers, vaccinologists and other experts so they can provide Biden with projections about the coming months.”

The report added that Biden has signalled that the government’s top infectious disease expert Anthony Fauci will have a prominent role in a Biden administration.

Among those who have briefed Biden on the economy are Chetty, “who has produced pathbreaking research on economic mobility and its roots in the last several years” and former chair of the Federal Reserve Janet Yellen.

On the issue of foreign policy, the NYT report said Biden would come to “office with more foreign policy experience than any president in memory”.

While some in his inner circle of foreign policy and national security advisers have worked for him through the years, Biden’s aides understand that “assumptions that governed Obama policymaking have changed, including the prospects for cooperation with China and the importance of the Middle East.”

Among the most influential foreign policy adviser for Biden is Antony Blinken, who has previously worked for Biden on the Senate Foreign Relations Committee and served as a deputy national security adviser and deputy secretary of state under Obama.

“Known more for his diplomatic touch than any fixed ideas, he is considered a likely candidate for national security adviser or secretary of state,” the NYT report said.