Two Orders And A 'Request', But Yashwant Sinha Refuses To Leave Srinagar Airport

Former External Affairs Minister Yashwant Sinha refused to fly back to Delhi from the next flight. He asked the deputy commissioner Budgam to come up with a written order. After an hour, the Deputy Commissioner Budgam indeed turned up with an order, asking him to leave Kashmir. 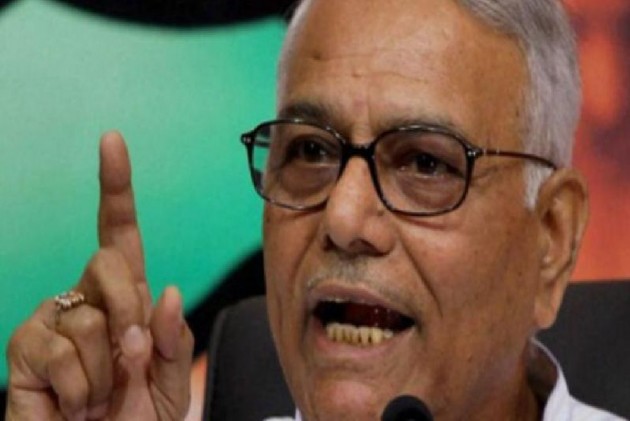 Concerned Citizens Group, a four-member civil society group led by Sinha, had arrived at the Srinagar airport at 11:30 am to visit the Valley. However, on Sinha's arrival at the airport , Tariq Ganai, Deputy Commissioner Budgam, asked the former Union minister to return as he was not allowed to enter the city which has been witnessing restrictions since August 5, the day when the Centre abrogated the special status to Jammu and Kashmir under Article 370.

Sinha refused to leave the airport and argued that the Deputy Commissioner show him a written order.

After an hour, Ganai issued the first order. “In exercise of the powers vested in me by virtue of Section 144 CrPc, I impose restrictions on the movement of Shri Yashwant Sinha, ex-senior minister, beyond the arrival lounge of Srinagar international airport till further orders so as to maintain peace and tranquility in the district,’’ the order read .

Sinha told Ganai that as per the order, he will stay at the airport lounge and would sleep on a sofa until he was allowed to enter the city.

As officials continued to insist that Sinha take a flight back to Delhi, the former BJP leader said the government had issued no such order.

It is then that Ganai came up with another order which read: “The international airport has no paid lounge facility or any other facility to stay for the night. In this situation, you are advised to immediately leave the airport and take the flight back.”

District administration order said the Srinagar airport is a defense airfield and is taken by the central forces in the evening after the operation hours.

Sinha again argued that police will have to arrest him under Section 188 of the Indian Penal Code (IPC) instead of sending him back to New Delhi.

When an officer present at the airport pleaded with Sinha, saying he is like his grandson, the former BJP leader said it was not about relations, but about law and the law doesn’t say that he can be deported.

Since the former BJP leader did not leave the airport even after two orders and a request, he was whisked away by police while his colleagues were locked inside a room.

“We later came to know through a policeman that he was sent back to New Delhi,’’ said Bharat Bushan, who was part of the delegation.