Two Ponds Earmarked For Idol Immersion In Bengal: Pollution Board 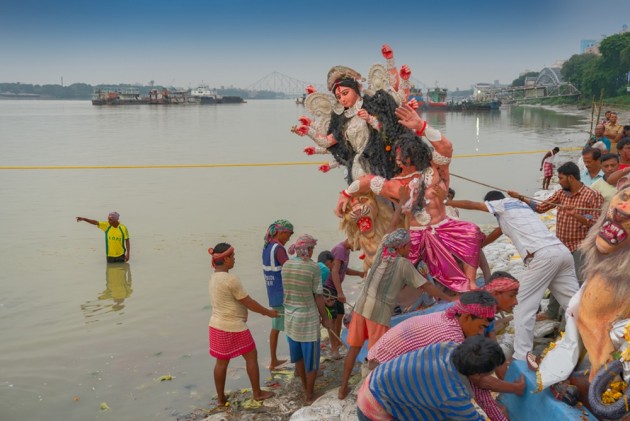 The West Bengal Pollution Control Board (WBPCB), as part of its measures to check river water contamination, has earmarked two ponds here for immersion ceremonies post Durga puja and Diwali, and put in place a mechanism to clean the reservoirs almost immediately after the ritual is observed.

Kalyan Rudra, the chairman of the board, said similar initiatives are taken every year for idol immersion in the Ganga and other rivers across the state, where the board, in coordination with the civic bodies, makes necessary arrangements to minimise water pollution.

"Two large ponds have been earmarked in Laketown and Dumdum, where synthetic liners will be used to pull out the idols, its accessories and flowers, right after immersion. The idea was initially adopted by Newtown Kolkata Development

Authority," Rudra said at a press meet on Wednesday.

The WBPCB will also be monitoring the quality of water in the Ganga in three phases -- pre-immersion, during immersion, and post-immersion -- to find out if the project was effective enough to curb pollution, and what more could be done in the regard, its chairman said.

Rudra further said that the board's helpline service has been upgraded, and people can file complaints about violation of environment norms round the clock.

The pollution watchdog will also monitor air quality from Diwali till March next year, Rudra said.

"We are setting up 58 new monitoring stations to keep a tab on the air quality across the state. There will be two such stations in each district.

"Due to lack of space in the congested areas, we had asked academic institutions including universities to allot space for setting up such stations, and they obliged. At least 20 per cent of the stations have been installed in universities," he said.

Asked if there was any link between air pollution caused by fireworks and the spread of COVID-19, Rudra said no scientific study conducted on the disease so far has found any such association between the two but maintained that he would consult IIT-Delhi experts on the matter.

"We are already examining the effects of burning crop residue through satellite imaging, in collaboration with IIT- Delhi. A similar method could be adopted during Diwali," he said, adding that the board will undertake a sustained campaign to generate awareness on the harmful effects of fireworks in the run-up to the festival.