The Sikkim Democratic Front, which ruled Sikkim for nearly 25 years, is now left with just one MLA- Pawan Kumar Chamling- who has also been the party supremo since its formation 26 years ago. 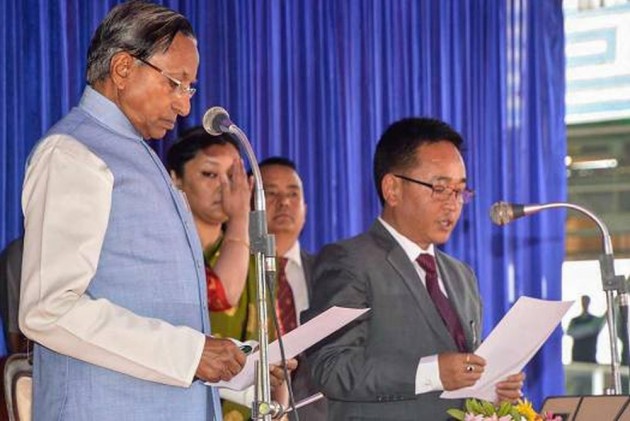 A day after its 10 MLAs joined BJP, Sikkim Democratic Front (SDF), suffered further jolt on Wednesday when two other legislators of the party switched over to the ruling Sikkim Krantikari Morcha (SKM).

On Tuesday 10 SDF MLAs had deserted the party and joined Bhartiya Janata Party in the national capital.

"We have joined the SKM as we feel comfortable with its leadership and agendas," Dhungel and Sharma told reporters here.

With the joining of two SDF MLAs, the strength of the ruling SKM has gone up to 18, while the BJP has 10 MLAs and the SDF is left with one MLA-Pawan Kumar Chamling- who has also been the party supremo since its formation 26 years ago.

Pawan Kumar Chamling ruled Sikkim for over 25 years, making him the longest-serving chief minister of the country, but he lost power in the recent polls.

The saffron party has now become the main opposition in the state, where it had not won a single seat in the Assembly polls held in April this year.

The 32-member Sikkim Legislative Assembly presently has 29 MLAs after three legislators vacated one seat each on being elected from two constituencies.

The two MLAs, who crossed over to SKM, had earlier revolted against the SDF leadership by attending the budget session of the Sikkim Legislative Assembly this month in defiance of the party's decision to stay away from the House.

"We had to make a choice after 10 SDF MLAs joined the BJP, a national party, in New Delhi yesterday... We consulted each other and decided to join the SKM as it remains the only
regional party which represents the interests of the local people," they said.

Dhungel and Sharma, who represent Upper Tadong and Namcheybong assembly seats respectively, had demanded from the Speaker L B Das to be given separate seats as 'SDF-2' which the latter had obliged.

The Sikkim gains has further enlarged the influence of the saffron party in the North-East.

The BJP is running government as the main party or in alliance with regional parties in all the northeastern states except Sikkim and this development has pushed the party closer to power in the picturesque tiny state as well.

The party won 15 seats while the SKM won 17 in the 32-member assembly. Since two of the SDF MLAs had won from two seats, they resigned from one seat each, reducing the party's strength to 13 in the assembly.

The SDF was a saffron ally earlier, but now the ruling SKM has replaced it as a member of the BJP-headed North-East Democratic Alliance.