The incident occurred in Mahakaleshwar Siva Temple in Ujjain on Monday after the arrival of Madhya Pradesh CM Shivraj Singh Chouhan caused a commotion. 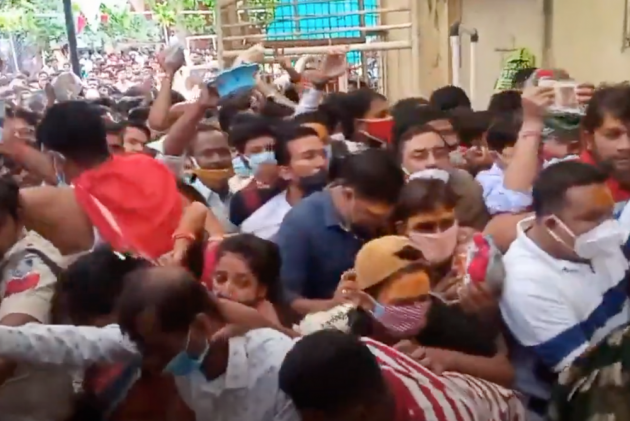 Madhya Pradesh Chief Minister Shivraj Singh Chouhan may have caused a stampede in Ujjain on Monday his visit to a temple led to crowds becoming uncontrollable.

Despite grave warnings about an imminent third wave of Covid-19 in India, many across the country continue to break Covid protocols and defy social distancing, potentially endangering the lives of thousands of others.

In one such incident, devotees in Ujjain were injured following a stampede that broke out in the Mahakaleshwar Siva Temple on Monday following visits by CM Chouhan along with some other VIPs. Several devotees including women and children were grievously injured in the commotion.

The incident took place at gate number four of the temple where despite Covid restrictions, the crowd was seen jostling and pushing against each other in a bid to enter the temple. Several tumbled down and others fell over them leading to one of the barricade gates getting damaged, an official said. A video of the incident went viral on social media.

“At around 8:30 am, a large number of people tried to enter for darshan and in the process broke the barricade at gate number four of the temple complex. After the barricade broke, several people tried to run towards the main deity but thankfully there was no untoward incident," the temple’s assistant administrator Moolchand Joonwal told PTI. “Due to it being the first Monday of the holy month of Shravan, people were allowed to stand in queues for darshan apart from pre-booking. However, the crowd that turned up was much larger than what we expected," he said.

Eyewitnesses said social distancing and other COVID-19 norms were violated as people queued up outside the temple.