The panel discussion was entitled 'The Cost to Britain of the Kashmir Crisis: Is There a Solution?' attended by Indian, Pakistani and British experts 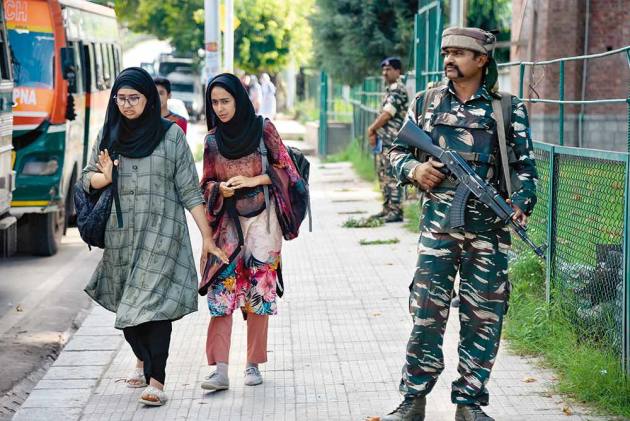 The international community does have a role in diffusing tension in Kashmir and an India-Pakistan dialogue could help arrive at a solution akin to the Good Friday Agreement in Northern Ireland, which allows a level of free exchange on both sides of the border, opined strategic experts in London over the Kashmir crisis on Thursday.

Sir Mark Lyall Grant, National Security Advisor to former British Prime Ministers Theresa May and David Cameron as well as a former Representative of the UK at the UN, lamented the "missed opportunity" of such a solution during the talks between former Indian Prime Minister Atal Bihari Vajpayee and former Pakistani President Pervez Musharraf in 2001.

"The political stars never quite aligned but a solution similar to the Northern Ireland Good Friday Agreement, with a soft border allowing locals to travel freely from one part of Kashmir to the other, will have to be the outcome of any peaceful solution," he noted.

During a panel discussion entitled 'The Cost to Britain of the Kashmir Crisis: Is There a Solution?', organised by strategic advisory group CTD Advisors at Chatham House in London, Indian, Pakistani and British experts had an exchange against the backdrop of India's revocation of the special status of Jammu and Kashmir under Article 370 of the Constitution.

"Nobody wants to see a further escalation in the region. We are on the cusp and brink of a much bigger crisis and the international community must stop being a fire brigade and intervene to find a peaceful solution," said Maleeha Lodhi, most recently Pakistan's Representative to the United Nations and also former high commissioner to the UK and ambassador to the US.

While the diplomat was vehement that Pakistan stands ready to resume a bilateral dialogue with India, the issue of ISI-backed cross-border terrorism was constantly raised during the course of the discussion as an impediment to talks.

"What Prime Minister Modi has done [by revoking Article 370] is outrageous and preposterous and seems not to have a strategy, but the reason Pakistan has far less traction on this issue internationally is precisely because of the role of the ISI and its sponsorship of state-funded terrorism," said Jack Straw, a former UK foreign secretary who has seen the situation up close in the aftermath of the terrorist attack on the Indian Parliament in 2001.

Hitting hard at Pakistan, leading television journalist from India Nidhi Razdan said the country had orchestrated years of insurgency in the region after it failed to grab Kashmir repeatedly since 1948 and that the region had bled as a result of that cross-border terrorism.

"That Pakistan is a breeding ground for terrorists is acknowledged by none other than its Prime Minister, Imran Khan, who candidly said during a visit to the United States in July this year that there were 40 different militant groups operating within Pakistan. Therefore, serious concerns remain in India concerning terror groups operating from Pakistan," she said.

On the internal dynamics in Jammu and Kashmir, Razdan was critical of the "unprecedented" communications curbs in the region since the revocation of Article 370 in August and expressed hope that India would live up to its own values as a democracy.

She said: "The Indian government maintains that ending the special status is all for the good of the people and for the development of the region. It's ironic that the people in whose name this has been done were not consulted at all. And that political leaders who carried the Indian flag all these decades are in detention.

"All this hardly burnishes India's credentials as the world's largest democracy."

Abdurehman Chinoy, a London-based entrepreneur, said his company Chinoy Group decided to organise such a panel discussion in the UK because the South Asian community here is not only "dynamic and tolerant" but can also influence policy and ideas back home in India and Pakistan.

Chinoy said: "We need to have dialogue to resolve this Kashmir issue, so the South Asian community continues to live in a more friendly way outside India and Pakistan.

"My humble message to Prime Minister Modi and Prime Minister Khan is that both leaders represent around 1.5 billion people globally; while it is easy to head towards confrontation, dialogue could definitely bring more stability and eventually prosperity in both countries."