UN Secretary General Is Meticulous About Tracking Developments In Afghanistan, Says His Spokesman

'We are particularly concerned about the shift of fighting to urban areas, where the potential for civilian harm is even greater,', said Stephane Dujarric, Spokesman for the Secretary-General. 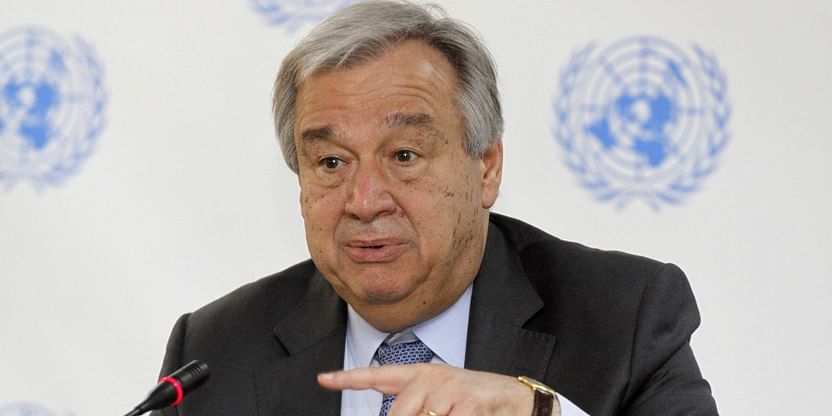 UN Secretary-General Antonio Guterres is meticulously surveilling developments in Afghanistan, according to his spokesman Stephane Dujarric.

He also added that the UN Chief is optimistic about restoration of the pathway leading to a negotiated settlement to the conflict after the discussions between the Afghan government and the Taliban in Doha will take place.

The Taliban led offensives are rapidly progressing in the war-torn country Afghanistan as they are gaining control over key provincial capitals. Reports say that the militant group has captured Herat and Kandahar, the country’s second and third largest cities after Kabul, and a strategic provincial capital on Thursday.

It comes just weeks before the end of the American military mission in Afghanistan. The US Embassy in Afghanistan issued a security alert Thursday, urging Americans to “leave Afghanistan immediately using available commercial flight options.”

"We are particularly concerned about the shift of fighting to urban areas, where the potential for civilian harm is even greater,” he said.

The Secretary-General expressed hope that the discussions this week in Doha between Afghan representatives and Taliban along with regional and international envoys, will restore the pathway to a negotiated settlement to the conflict.

“The United Nations stands ready to contribute to such a settlement and remains focused on providing assistance to the increasing number of Afghans in need,” Dujarric said.

Responding to a question, he said “it is clear that urban fighting in the city the size of Kabul would have a catastrophic impact on civilians, and we very much hope that this does not happen.”

On the humanitarian front, he said many people are arriving in Kabul and other large cities, seeking safety from the conflict and other threats.

"With 18.4 million people already in need of humanitarian assistance, and conflict displacement of up to 390,000 people this year alone, humanitarian organisations continue to operate in Afghanistan,” he said.

He added that inter-agency assessments were ongoing in the field, focusing on displacement, conflict, floods, gender issues and protection monitoring to determine the humanitarian needs and immediate response requirements.

Dujarric said the humanitarian community — both the UN and non-governmental organisations — remains committed to helping people in Afghanistan, but the security environment is highly complex and clearly challenging.

Responding to questions, Dujarric said the Security Council has a very important role to play through a unified voice in helping bring peace and at least a halt to the fighting as quickly as possible in Afghanistan.

He said that the UN staff and humanitarian staff “are determined to stay and support the people of Afghanistan, but, obviously, we also are taking into account a very, very complex and difficult security situation.”

The UN has about 3,000 or so national staff and about 300 international staff on the ground and more people are working remotely because of the COVID-19 situation.

Dujarric said Arnault is continuing his contacts with all the delegations in Doha, including from Afghanistan, the Taliban and the US and others.

"We are not blind to the suffering of the civilians who are caught in the crossfire in urban environments. As to whether or not they have breached an agreement signed with the US, that is for the parties who have signed the agreement to declare whether or not a party is in breach,” he said.

To a question on whether the UN asked the Taliban specifically not to attack its staff and facilities in Afghanistan, he said as in any conflict area, “we are in touch with all parties to the conflict, reminding them of their responsibility, not only to protect civilian infrastructure but of the inviolability of UN premises, of the need and their responsibilities to ensure that UN staff and UN premises are kept safe.”

Since the start of the year, nearly 390,000 people have been newly displaced by conflict across the country, with a huge spike since May.