Senior BJP leader, Naqvi claimed that opposition parties, after becoming alienated from the masses, are now involved in a conspiracy to defame the main pillar of Indian democracy, by raising questions on the credible and transparent election process of the country. 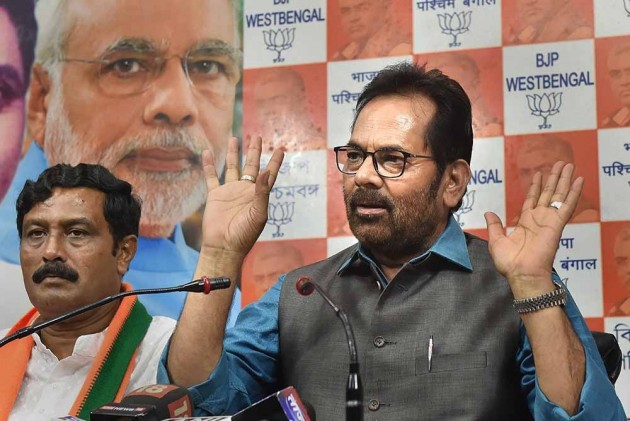 Attacking the Congress and other opposition parties for raising concerns about EVMs, senior BJP leader Mukhtar Abbas Naqvi, on Wednesday said they want to “discredit” democracy as they are unable to digest “defeat of the dynasty”.

The Minority Affairs Minister said the “glamour of victory and grace in defeat” should be two sides of the same coin for those who believe in democracy.

The way the Congress and its allies are putting on a “horror show over their defeat”, makes it clear that these political parties want to make the country's democratic and constitutional system a “means of convenience”, Naqvi told reporters.

Those political parties, that are continuously trying to create an atmosphere of mistrust on EVMs, had discussed the issue of credibility of EVMs and the election process for several hours in Parliament, he said, adding that they failed to present any logic or fact against the EVMs.

“Their failure and embarrassment on providing evidence against EVMs during the discussion was like 'Khoda Pahad Nikli Chuhiya' (much ado over nothing),” he said.

Naqvi alleged, that after their failure in the country on the issue of EVMs, one of the Congress leaders started a campaign against EVMs abroad also.

The “EVM vilaap mandli” wants to make “EVMs their hamper of defeat” by raising questions about Indian democracy and the election process, Naqvi said.

Unable to digest “defeat of the dynasty”, they want to discredit democracy, he alleged.

Naqvi claimed that opposition parties, after becoming alienated from the masses, are now involved in a conspiracy to defame the main pillar of Indian democracy, by raising questions on the credible and transparent election process of the country.

But, the people of the country will not allow any such conspiracy to succeed, he added.

Opposition parties Tuesday raised concerns over reports of alleged tampering of EVMs and asked the Election Commission to ensure transparency in counting.

Exit polls on Sunday projected that the NDA will retain power at the Centre.