'I earnestly appeal to you to seriously ponder over the situation and withdraw the statement so that our democratic fabric is no longer dented,' West Bengal Governor wrote to Mamata Banerjee. 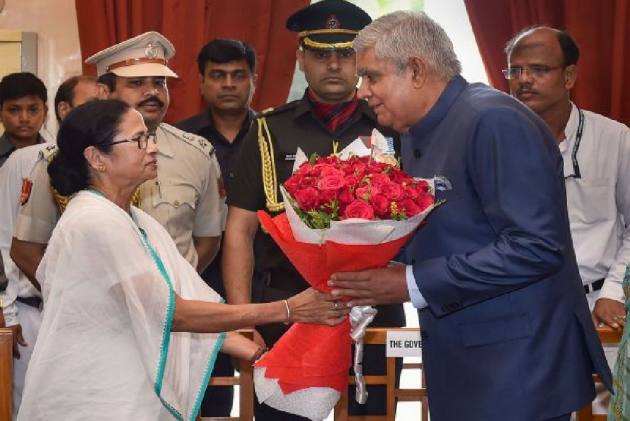 West Bengal Governor, Jagdeep Dhankar, has accused Chief Minister Mamata Banerjee of violating the Constitution after she demanded an "impartial organisation" like United Nations (UN) to form a committee to check how many people were in favour of the Citizenship (Amendment) Act.

“I am sure that your statement has the potential to generate incalculable damage to the letter and spirit of the Constitution. I find it both unconstitutional and not in consonance with your stature and high office you hold,” Dhankar wrote in a letter to Banerjee on Friday.

Dhankhar also appealed to the chief minister to withdraw her statement to this effect.

"I earnestly appeal to you to seriously ponder over the situation and withdraw the statement so that our democratic fabric is no longer dented. I am very hopeful that you will heed my well-meaning suggestions keeping in view the Constitutional essence and take the expected way forward approach,” the Governor wrote.

After her remarks drew flak, Banerjee said in a public meeting on Friday that she was misinterpreted by media. She said she had not called for a UN-monitored referendum over the Citizenship (Amendment) Act, but demanded an opinion poll over the issue.

Speaking to Outlook, the Governor said he would "everything in his power to protect the letter and spirit of Constitution".

After the state government decided to stay the preparation and updation of the National Population Register (NPR), the West Bengal Governor shot another letter to the chief minister on the same day and said that it was surprising that this decision was not communicated to him and that it had come to his notice from what was being circulated in the public domain.

"In view of the serious policy issue involved, I hereby require you (Banerjee) to submit this matter for the consideration of the Council of Ministers," the Governor wrote.

This implies that any such decision by the state government will have to eventually come to the Governor for further approval and he might block that.