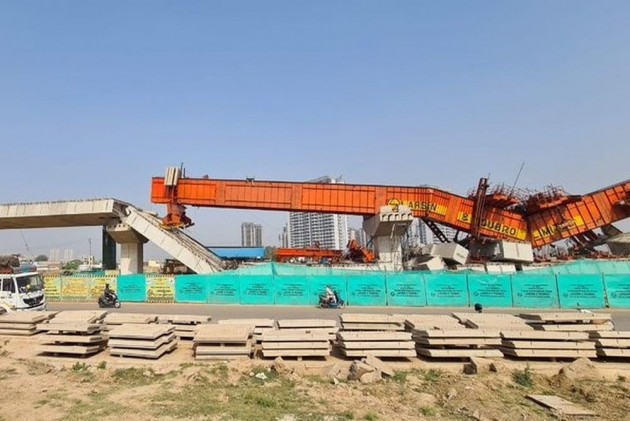 A section of an under-construction flyover of the Dwarka Expressway in Gurgaon collapsed Sunday morning.

According to reports, three people were injured as two concrete slabs of the flyover near Daultabad Chowk fell around 7:30 a.m. The injured were immediately rushed to a private hospital nearby.

“The elevated road collapsed around 7.30 am. Three people, all of whom are laborers, have sustained injuries, but these are not serious. They are undergoing treatment at a private hospital in Gurgaon. There have been no fatalities,” said Deepak Saharan, DCP (West) as quoted by The Indian Express.

“The reason for the collapse is yet to be determined, an inquiry will be initiated into the matter. As per information available until now, there have been no fatalities in the incident. There was no work going on at the site when it happened,” said Nirman Jambulkar, Project Director, of the expressway.

The 27.6 KM long Dwarka Expressway is intended to connect Kherki Daula on the Delhi-Gurugram Expressway with Shiv Murti near Mahipalpur. The cost of the project is estimated to be Rs 9,000 crore.