Under India's Presidency, UNSC To Discuss Situation In Afghanistan

Atmar said the UN and the international community must play a greater role to stop the unfolding tragedy in Afghanistan due to Taliban violence and atrocities. 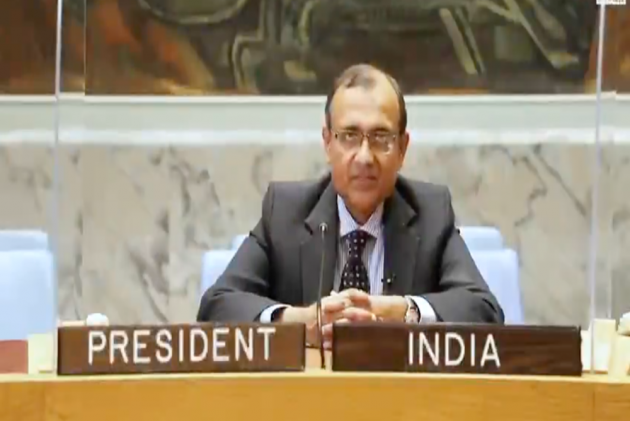 The UN Security Council, under the Presidency of India, will meet today to discuss the worsening security situation in Afghanistan. “UN #SecurityCouncil will meet on Friday, 6th August, under Indian Presidency to discuss and take stock of the situation in #Afghanistan," India’s Permanent Representative to UN and Security Council President for the month of August Ambassador T S Tirumurti tweeted late on Wednesday.

Atmar said the UN and the international community must play a greater role to stop the unfolding tragedy in Afghanistan due to Taliban violence and atrocities.

“Appreciate the lead role of as current UNSC President,” Atmar had tweeted.

The fighting between the Taliban and Afghanistan's government forces has intensified over the past few months as US and NATO troops complete their pullout from the war-torn country.

A meeting on Afghanistan had not been scheduled during the month as per the Council’s Programme of Work for the month adopted on Monday.

It is significant that the open briefing on Afghanistan comes within the first week of India’s Presidency of the Council, highlighting the urgency of the current situation in Afghanistan.

Tirumurti had said that the situation in Afghanistan is of deep concern to all members of the Security Council and "we have seen that in recent days, the violence is only increasing.”

As far as India is concerned, he had said New Delhi has mentioned very clearly that “we want to see an independent, peaceful, democratic and a stable Afghanistan. India has supported every opportunity that can bring peace, security and stability in Afghanistan.”

“We are convinced that…we should address the question of violence and the targeted attacks and these are very serious concerns and all violence must come to an end. Ties with international terrorism should also be cut. We cannot have terrorist camps once again moving back into Afghanistan. And this will have a direct impact on India,” Tirumurti had said.

He had underlined that it is also “important for us to protect the gains which we have had in the last nearly 20 years,” adding that aspirations of the Afghan women, youth and minorities must be respected.

On Tuesday, the powerful 15-nation Security Council had condemned in the “strongest terms" last week’s “deplorable” attack against the United Nations compound in Herat, Afghanistan and expressed “deep concern” over the high levels of violence in the war-torn country following the Taliban’s military offensive.

The Council also declared that it does “not support the restoration of the Islamic Emirate.”

"The members of the Security Council called on both the Islamic Republic and the Taliban to engage meaningfully in an inclusive, Afghan-led and Afghan-owned peace process in order to make urgent progress towards a political settlement and a ceasefire,” the strongly-worded UNSC Press Statement had said.