The plan was to airlift over 180 people stranded in Afghanistan, however due to restrictions imposed by the Taliban, only 35 could make it to Kabul Airport. 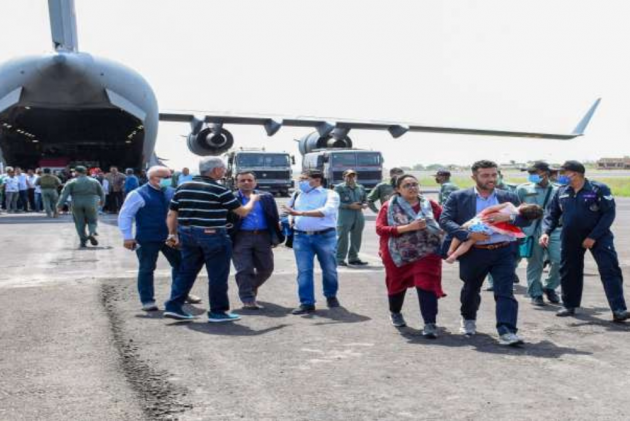 With security situation continuining to deteriorate in war torn Afghanistan, India on Thursday evacuated 24 of its citizens along with 11 Nepalese nationals in a military aircraft from Kabul.

The plan was to bring back over 180 people from Afghanistan, only 35 people were airlifted as others couldn’t reach the Kabul airport to board C-17 aircraft of the Indian Air Force, due to multiple restrictions imposed by the Taliban in the city, said the people familiar with the development.

"Op Devi Shakti in action! @IAF_MC flight with 24 Indian and 11 Nepalese evacuees from Kabul is on its way to Delhi. #DeviShakti," External Affairs Ministry Spokesperson Arindam Bagchi tweeted in the morning.

Op Devi Shakti in action!@IAF_MCC flight with 24 Indian and 11 Nepalese evacuees from Kabul is on its way to Delhi. #DeviShakti

The people cited above said the security situation around the Kabul airport deteriorated further in the last couple of days due to which the Afghans and other people could not reach it.

There has been a scramble by various countries to evacuate their citizens from Kabul before the August 31 deadline for the withdrawal of American troops from the war-ravaged country.
American forces have been handling the security at the Hamid Karzai international airport in Kabul.

Under its mission "Operation Devi Shakti", India has already evacuated over 800 people after Kabul was captured by the Taliban on August 15.

Thousands of Afghans have been crowding around the Kabul airport for over a week, in a desperate attempt to flee the country fearing the Taliban's brutality.

Several G-7 leaders requested US President Joe Biden to extend the August 31 deadline for the withdrawal of American troops. However, Biden said the US is trying to stick to the timetable.

In the last few days, India has stepped up efforts to evacuate its citizens as well as its Afghan partners from Kabul in view of the deteriorating security situation in the Afghan capital and other parts of the country.

On Tuesday, 78 people, including 25 Indian nationals and a number of Afghan Sikhs and Hindus, were airlifted to Delhi from Dushanbe, a day after they were evacuated from Kabul to the Tajik city.

The Taliban seized control of Kabul on August 15. Within two days of the Taliban's capture of Kabul, India evacuated 200 people, including the Indian envoy and other staffers of its embassy in the Afghan capital.

The first evacuation flight brought back over 40 people, mostly staffers at the Indian embassy on August 16. The second aircraft evacuated around 150 people including Indian diplomats, officials, security personnel and some stranded Indians from Kabul on August 17. (With PTI inputs)