Live Updates: Union Budget 2019 Has Been Presented With A 10-Year Vision In Mind, Says FM Sitharaman 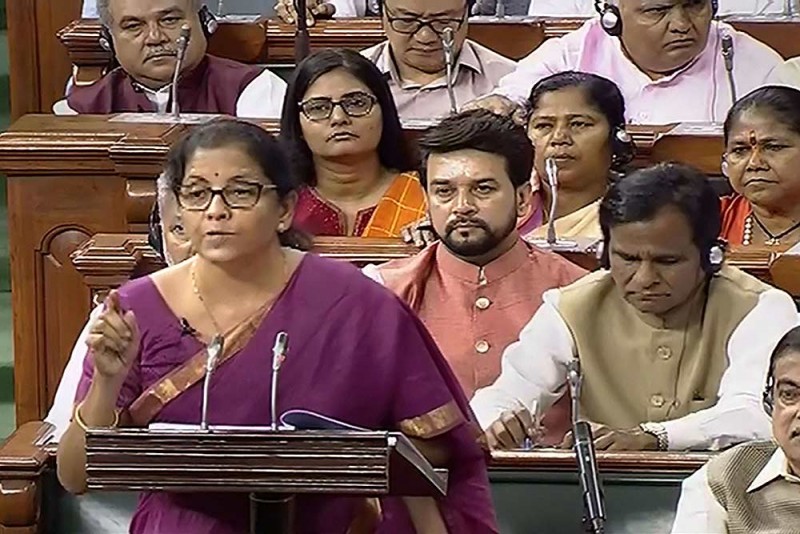 Presenting the first Budget of the Modi government in its second term, she said the Indian economy, which stood at USD 1.85 trillion five years back, has reached USD 2.7 trillion now, and is within capacity to reach USD 5 trillion in the next few years.

The Finance Minister on Thursday tabled in Parliament the pre-Budget Economic Survey for 2018-19, which projected the state of the economy and outlined its challenges. The survey was released by Chief Economic Adviser Krishnamurthy Subramanian.

Below are live updates from the Parliament:

4:59PM: "Finance Minister has said very little on agriculture. The agriculture growth rate has declined to 2.9%. The government aims to achieve 4 per cent but has not disclosed anything to reverse the slidal of the agriculture sector," says Congress leader P. Chidambaram in a press conference.

4:56PM:  Congress leader P Chidambaram says the budget doesn't give the allocation of defence, and it is very unfair to the people of India.

4:30PM: "It's a budget for all. It has addressed issues which will make 'ease of living' for the poor, the middle class. It has ensured large scale infrastructure development which have made life & living easy for 130 crore Indians, rich or poor," says Union Minister Piyush Goyal

4:00 PM: The BSE Sensex plunged 395 points Friday on heavy selling in metal, power, auto and IT counters after the Budget proposal of raising public shareholding threshold stoked fears about liquidity in the market.

2:56PM: "Non-Banking Financial Companies(NBFC) are a critical component of our banking system," Sitharaman said, adding, "The Government has adopted a comprehensive approach for NBFC financing."

2:54PM: "Every target we have given - tax and revenue collections - are all absolutely reasonable limits," the finance minister said in a post-budget announcement press conference.

2:53PM: "The emphasis was very clearly on the overall development of the economy. We looked at rural initiatives, all of which will give a certain dynamic to the rural areas. Similarly, we looked at how urban living can be better," Nirmala Sitharaman said.

2:08PM: "The promotion of electric vehicles and allied infrastructure is set to transform the economy and logistic sector. It is one of the biggest step to curb pollution and move towards sustainable development," says Transport and MSME Minister Nitin Gadkari.

2:05PM: "Inspired by the mantra of ‘Sabka Saath, Sabka Vikas and Sabka Vishwas’ the Union Budget 2019-20 has not only outlined the vision for ‘New India’ but it is also focused on bringing a qualitative change in people’s lives," says Defence Minister Rajnath Singh

1:48PM: Poor will be strengthened by the budget, says PM Modi

1:46PM: This budget is about hope, faith and aspiration, says PM Modi

1:35PM: " It is for the first time since independence that a full-time woman finance minister has presented the Union Budget. I want to congratulate her. The budget fulfills the expectations of the people of the country," says Uttar Pradesh CM Yogi Adityanath

1:05PM: Propose to increase customs duty on gold and other precious metals from 10% to 12.5%. Basic customs on select goods hiked

1:04PM: Exemptions from customs duty on certain electronic items made in India

12:56PM: Enhance surcharge on individuals having taxable income from Rs 2cr-5cr and Rs 5cr and above. Effective tax rate to increase by 3% and 7% respectively: FM

12:55PM: Proposes to levy TDS of 2% on cash withdrawal exceeding Rs 1 crore in a year from bank account, says FM

12:52PM: PAN card and Aadhaar Card to be made interchangeable

12:45PM: All companies having annual turnover of upto Rs 400 crore to have corporate tax of 25%, says FM

12:33PM: In the first 50 years after independence, we emphasised on our rights. On 75 years, we should place emphasis on our duties towards India without undermining our rights

12:32PM: India’s sovereign external debt to GDP is amongst the lowest globally at less than 5%: FM

12:27: On Disinvestment, Govt is considering to go below 51% on case-to-case basis

12:23PM: NBFCs that are fundamentally sound should continue to get funding from banks and MFs. Govt will provide one-time six months partial credit guarantee to public sector banks for first loss upto 10 per cent: FM

12:20PM: NPAs in commercial banks have reduced by over Rs 1 lakh crore in last one year

12:14PM: Propose to consider issuing Aadhar cards for non-resident Indians with Indian passports after their arrival in India without waiting for 180 days: FM

12:12PM: Propose to expand women SHG interest subvention programme to all districts of India. One woman in every SHG will also be eligible for a loan of Rs 1 lakh under MUDRA scheme: FM

12:02pm: The govt proposes to streamline multiple labour laws into a set of 4 labour codes. This wil ensure that process of registration and filing of returns will get standardized and streamlined: FM

12:01pm: The govt proposes to streamline multiple labour laws into a set of 4 labour codes

11:52am: More than 95% of our cities have become open defecation free

11:50am: This govt sees rapid urbanization as an opportunity rather than a challenge, says FM. Under Pradhan Mantri Awas Yojana (Urban) over 81 lakh houses have been sanctioned

11:49am: Under Swach Bharat Abhiyaan, 9.6 cr toilets have been constructed since Oct 2, 2014. More than 5.6 lakh villages open-defecation free. Propose to expand mission to undertake solid waste management in every village; FM

11:46am: Jal Shakti Mantralaya will look at management of water resources and water supply in integrated and holistic manner to ensure ‘har ghar jal’ to all rural households by 2024: FM

11:45am: Ease of doing business and ease of living should apply to farmers too. Need to replicate model of Zero budget farming: FM

11:33am: Every Rural Household To Have Electricity, Clean Cooking Gas Connections

11:28am: Proposes further opening of FDI limits in aviation, media, insurance. 100% FDI will be permitted for insurance intermediaries , says FM

11:25am: It is proposed to rationalize and streamline KYC norms for FPIS to make it more investor-friendly, says FM

11:24am: Govt has decided to increase pension benefit to retail traders and shopkeepers with annual turnover of Rs 1.5 crore

11:20am: Rs 350 cr allocated for 2 per cent interest subvention for all GST-registered MSMEs on fresh or incremental loans, says FM

11:19am: Our govt launched UDAY in 2015 aimed and financial and operational turnaround of discoms. Govt is examining performance of the scheme, says FM

11:18am: It is estimated that railway infrastructure would need an investment of Rs 50 lakh crore between 2018-30. It is therefore proposed to udnertake PPP to unleash faster development, says FM

11:06am:  Our economy was at approx USD 1.8 trillion when we formed govt, it has now reached USD 2.7 trillion. Hence it is well within our capacity to reach USD 5 trillion in next few years: FM

11:04am: Our objective was and continues to be ‘Mazboot desh ke liye mazboot nagrik'. Mega programes and services which we initiated and delivered during those 5 years will now be further accelerated: FM

11:02am: Between 2014019, Modi govt provided rejuvenated centre-state dynamic, cooperative ferdealism. We have set the ball rolling for a New India, says Sitharaman

10:54am: Union Cabinet approves Budget 2019 . It will be presented by Finance Minister Nirmala Sitharaman at the Lok Sabha shortly.

#WATCH Delhi: Parents of Finance Minister Nirmala Sitharaman - Savitri and Narayanan Sitharaman - arrive at the Parliament. She will present her maiden Budget at 11 AM in Lok Sabha. #Budget2019 pic.twitter.com/Wp3INz7ifN

10:30am: Copies of Budget being brought to the Parliament (Photo: ANI) 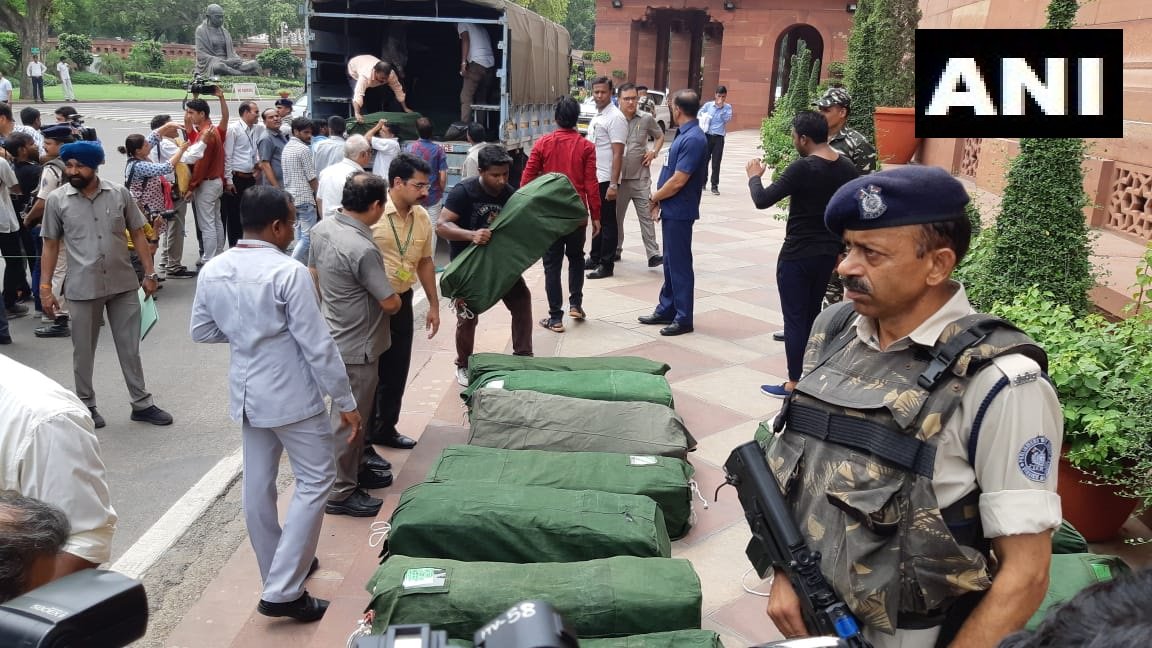 10:20am: Some believe Finance Minister may give relief to the common man by raising personal income tax threshold for certain categories while at the same time, upping spending on agriculture, healthcare and social sectors.

10:10am: A big push to the farm sector is expected on Friday in the first budget of the Modi government 's second innings.

10:01 AM: Finance Minister Nirmala Sitharaman meets PresidentRam Nath Kovind before she delivers her Budget 2019 speech in the Lok Sabha at 11 am.

9:39 AM: Nirmala Sitharaman carries budget documents in a four-fold red cloth carrying instead of a briefcase.

Chief Economic Advisor Krishnamurthy Subramanian on FM Nirmala Sitharaman keeping budget documents in four fold red cloth instead of a briefcase: It is in Indian tradition. It symbolizes our departure from slavery of Western thought. It is not a budget but a 'bahi khata'(ledger) pic.twitter.com/ZhXdmnfbvl

8:57 AM: Union Finance Minister Nirmala Sitharaman has arrived at the finance ministry as the country is all set to hear her maiden Budget speech at 11 am today.

Delh: Finance Minister Nirmala Sitharaman arrives at Ministry of Finance. She will present the #Budget2019 today at 11 am in Lok Sabha. pic.twitter.com/ttrVBWK10O