The train cuts the time travelled between the two cities to six hours 15 minutes from the six hours 40 minutes taken by the Swarna Shatabdi, currently the fastest train on the route. 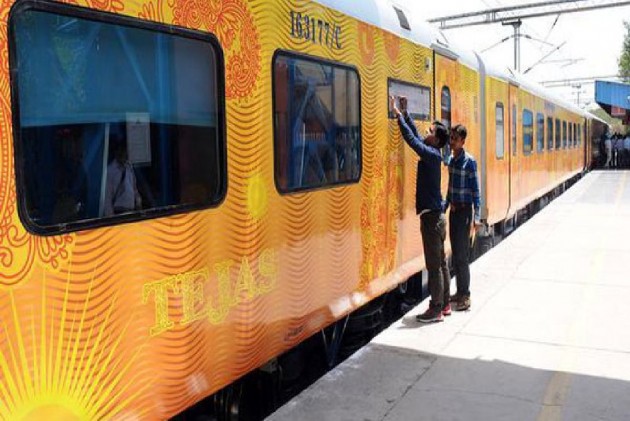 "It is the first corporate train of the country. I congratulate the first batch of passengers travelling in it and hope such initiatives are taken to connect other cities as well," Adityanath said.

The Chief Minister also pitched for a “semi-bullet train” on the Agra-Varanasi route also promising that if the railways take this project up, the state government will bear the cost of the land.

"We are constructing an expressway between Agra, Lucknow and Varanasi. Half of the work is over and the project will be completed next year,” he said, suggesting that a semi-high speed train could also be run on this route.

“If the railway board takes any initiative on this, the state will bear the cost on the Agra-Varanasi route,” he said.

He said such initiatives can also be taken on other routes, including Lucknow-Allahabad and Lucknow-Gorakhpur.

"I thank Prime Minister Narendra Modi and Railway Minister Piyush Goel for giving the first corporate train from the biggest state to Delhi,” he said.

The commercial run of the new Tejas Express starts on Saturday. It will run on all days of the week, except Tuesday. It will have only two halts — Kanpur and Ghaziabad.

The train cuts the time travelled between the two cities to six hours 15 minutes from the six hours 40 minutes taken by the Swarna Shatabdi, currently the fastest train on the route.

If this experiment of handing over certain operations to IRCTC is successful, the railways will make way for private operators to run trains in India, officials said.

The Tejas Express is a premium version of the Shatabdi Express category of air-conditioned chair-car trains, with tickets being priced at Rs 1,280 for AC chair car passengers and Rs 2,450 for executive chair car. However, due to dynamic pricing, the costliest Tejas ticket till now is Rs 4,325.

Commenting on the astronomical price of the tickets Adityanath said when mobile phones were first introduced, the charges were astronomical but now every person has it, he said.

"This happened due to healthy competition. We need that to provide better facilities to people," he added.

“This is a competitive era and there is a need for environment-friendly public transport to be accepted in society," Adityanath said.

In a first, passengers will be paid for any delay on an hourly basis. Also, each passenger will get free Rs 25 lakh insurance.