In Rajasthan's Pratapgarh also, the police made few youngsters hop along a road as a punishment for violating the Coronavirus lockdown. 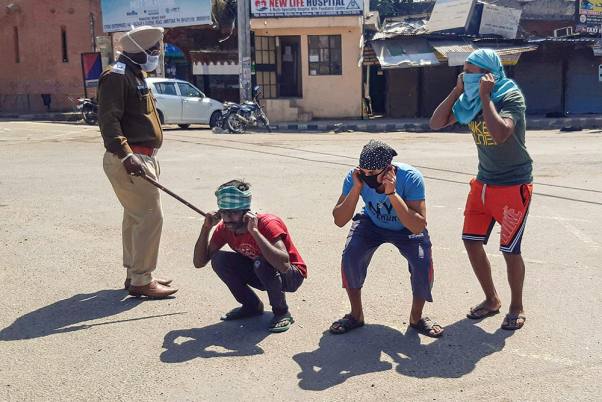 Videos have been emerging from different parts of the country showing police excesses against people stepping out of their homes amid the lockdown imposed in the wake of Coronavirus pandemic.

In one such case of police high handedness, people possibly going to their native places were made to hop along a road with their bags strapped on their backs as a punishment for violating the lockdown.

In the video of the incident, a few men can be seen being made to hop along the road with a stick-wielding policeman keeping a watch.

After the video surfaced, Senior Superintendent of Police (SSP) Budaun Ashok Kumar Tripathi expressed regret and said the matter is being probed.

"Being the police chief of the district, I feel sorry and I apologize for this. An investigation is being conducted against those responsible," he said.

The police in Belgaum, Karnataka, on Thursday also thrashed people who had gone to offer prayers at a mosque despite the nationwide lockdown in force.

In a video, the police personnel can be seen thrashing the people with batons while they were leaving after offering prayers at a local mosque.

In another incident in Rajasthan's Pratapgarh, the police made few youngsters hop along a road and even gave the 'murga,' punishment to a few of them for violating the restrictions.

Prime Minister Narendra Modi had announced a countrywide lockdown on Tuesday as a measure to check the spread of the highly contagious coronavirus.

The total number of positive coronavirus cases in the country now stands at 694, including 593 active cases, according to the Union Ministry of Health and Family Welfare.

Of the total cases, 42 persons have been cured or discharged and 16 have died.