A Mahila Congress leader, who is the face of the ‘Ladki Hoon, Lad Sakti Hoon’ campaign, however, has accused the party of anti-women bias after she was denied a ticket for the upcoming Uttar Pradesh Assembly elections. 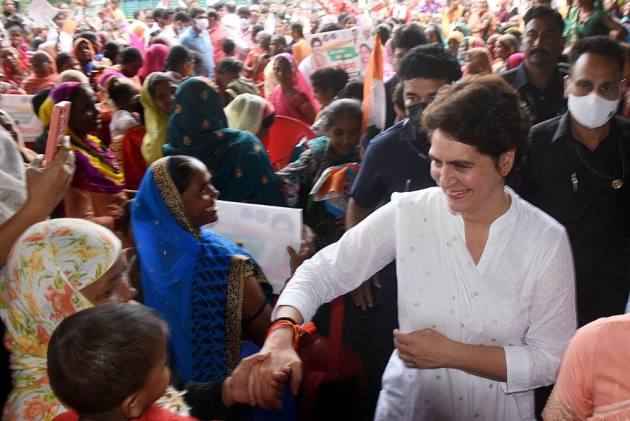 Over seven years ago, Uttar Pradesh Chief Minister Yogi Adityanath wrote an essay on women. Though the controversial piece has been retracted from his website now, the backlash that it triggered in 2017 has not died down yet.

Ahead of the crucial state assembly elections in Uttar Pradesh, the first list of 125 candidates issued by Congress flies in the face of the 'misogynistic' views that Adityanath expressed in his blog. The list has 50 women names accounting for the promised 40 per cent representation to the women in this election. And many of these women candidates have either been persecuted or maligned in the past for various reasons.

Whether the 40 per cent poll plank would translate into electoral gains for Congress or not seems uncertain as yet. But the party’s slogan and song, “Ladki Hoon, Lad Sakti Hoon" (I’m a girl and can fight), seems to have challenged the Bharatiya Janata Party's poll slogans and taglines that are, as usual, steeped in masculine-Hindutva.

Out of power in the state for over the past 30 years now, Congress had written to Prime Minister Narendra Modi in November 2017, urging him to take advantage of the BJP’s majority in the Lower House to get the women’s reservation bill passed in the Lok Sabha. Sonia Gandhi, the Congress president, had assured support of her party, saying the legislation would be a “significant” step towards women’s empowerment.

On Thursday, Priyanka Gandhi Vadra, while releasing the list of Congress candidates for the upcoming state polls, said, “With this historic initiative, we hope to bring in a new kind of politics. It is an attempt to bring women into governance and enable them to correct a system that has failed them for so long.”

Asha Singh, the mother of the Unnao rape survivor, is the most prominent name on the list. Her 17-year-old daughter was kidnapped and raped by the expelled BJP MLA Kuldeep Singh Sengar in 2017. While her husband died in police custody, the CBI had told the court that Sengar and his brother had assaulted him and framed him in an Arms Act case in collusion with the local police. The family was subjected to persistent harassment by Sengar.

Noted activist Sadaf Jafar has also been named as a Congress candidate. She was arrested for protesting the Citizenship Amendment Act in Lucknow in December 2019. Soon after being released on bail, she said in her interviews that she was kicked in the stomach and knees when she was in police custody. Filmmaker Mira Nair had shared an article on her arrest and wrote on Twitter, “This is our India now - Appalling: our #SuitableBoy actress, Sadaf Jafar, beaten and jailed for peaceful protest in Lucknow!” A single mother who comes from a family of freedom fighters, Jafar has been a vocal proponent of women's rights. Her name and photo have also appeared on the Bulli Bai app.

Poonam Pandey, an Accredited Social Health Activist or ASHA worker, was at the forefront of the protest by the women foot soldiers of the National Health Mission in Uttar Pradesh. The protest was held in support of their long-standing demand for enhancement of their wages as per the Minimum Wages Act. During a protest demonstration, she was thrashed and detained by the police. Priyanka Gandhi paid her a visit soon after a video showing cops brutally assaulting her went viral on social media. She is going to contest on the party’s ticket from Shahjahanpur.

Another Congress candidate, Ritu Singh, was molested by a BJP leader during the block panchayat elections in Lakhimpur. The visuals that emerged on media and social media showed several men pulling her sari at the block poll office as the bystanders looked on. A candidate of the Samajwadi Party then, she had accused some BJP members of assaulting her inside the returning officer’s room where she had gone to file her nomination papers.

While the police were present on the scene, she alleged, they didn’t intervene. Police had registered a case against a supporter of Rekha Verma, BJP MP from Dhaurahra and Yash Verma, district BJP president, but there has been no headway in the case so far. Ritu Singh will contest assembly polls from Lakhimpur Kheri on a Congress ticket.

Archana Gautam, the Congress nominee from Meerut’s Hastinapur assembly seat, was a model and an actress before she joined the party two months ago. As soon as Congress announced her candidature, trolls dug out her old videos and pictures to malign the “Ladki Hoon, Lad Sakti Hoon” campaign and attack her for her showbiz career.

But, in a dramatic turn of events, Priyanka Maurya, the face of the Congress party’s women’s manifesto “Shakti Vidhan”, has described the campaign as a sham. Miffed over denial of a ticket from the Sarojini Nagar seat in Lucknow, Maurya has accused the party of anti-women and anti-OBC bias. Alleging irregularities, she also accused the party of “cash for poll tickets”.