'On the night of the ambush, Dubey was aware that a police team was coming to Bikru,' a senior officer said. 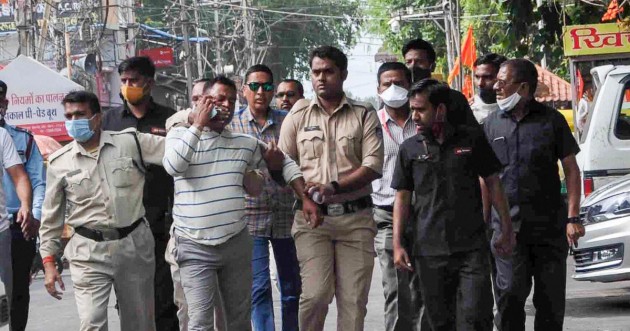 The three-member SIT formed to probe the ambush of policemen in Kanpur has pointed to a nexus between police and slain gangster Vikas Dubey and recommended action against 80 police personnel, a senior officer said on Thursday.

The 3500-page report was submitted to the government by the Special Investigation Team (SIT) on Wednesday.

"In the report, the SIT has given 36 recommendations and gave details of the role of guilty officers and 80 police personnel," the officer said.

The government will take action after going through the report, he said.

Eight policemen were ambushed in Bikru village in Chaubeypur area of Kanpur when they were going to arrest Dubey and fell to bullets fired from rooftops shortly after midnight on July 3. Dubey was later killed in an encounter on July 10

The SIT report points to a nexus between police, administration officials and Dubey.

"It came to the fore that policemen used to give tip-offs to Dubey and on the night of the ambush, Dubey was aware that a police team was coming to Bikru," the officer said.

The SIT findings point to the alleged negligence of police in taking action against Dubey against whom a number of criminal cases were pending.

The SIT report also pointed to police failure in getting Dubey and his men convicted in court, alleged negligence of police personnel posted at Kanpur''s Chaubeypur police station and senior officers, sources said.

During the probe, the SIT also analysed Dubey's mobile phone records in the past one year and found out that policemen were in regular touch with him.

The government had constituted the SIT led by Additional Chief Secretary Sanjay Bhoosreddy which had Additional DG Hari Ram Sharma and DIG Ravinder Goud as its members on July 11.

The SIT was initially asked to submit its report by July 31 after looking into all angles, studying all related documents and spot inspection in Kanpur but the time given was later extended by the government.