UP Student, Who Accused Chinmayanand Of Rape, Sent To Jail In Extortion Case

The UP law student was arrested from her home in Shahjahanpur and taken to the Kotwali police station. 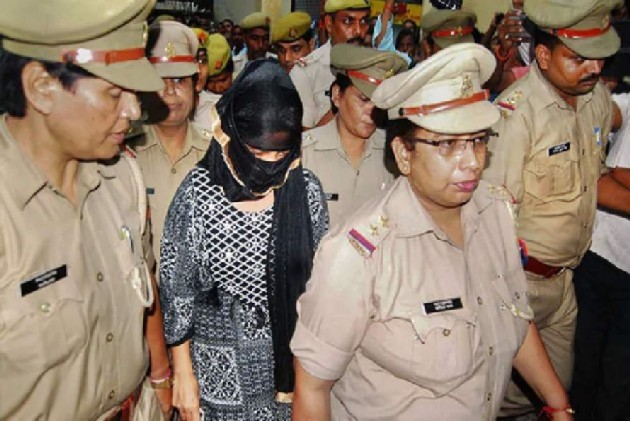 The 23-year-old student who accused BJP leader Swami Chinmayanand of rape was arrested on Wednesday on charges of extortion and sent to 14 days judicial custody, police said.

She was arrested around 9.15 am from her home by the Special Investigation Team (SIT) of the Uttar Pradesh Police amid massive deployment of forces, sources said.

SIT chief Naveen Arora said the student was arrested after "enough" digital and forensic evidence were found and statements of people recorded.

Who Is Chinmayanand, BJP Leader Accused Of Rape By Law Student?

After Rape Allegations, BJP's Chinmayanand To Be Stripped Of Sainthood

"We have sufficient evidence that Rs 5 crore extortion money was demanded from Chinmayanand. Those arrested said they sent messages to Chinmayanand on directions of the girl in panic as they were not getting money and were upset," he told reporters here.

The Shahjahanpur locality where the student lives witnessed heavy deployment of police personnel on Wednesday morning. Roads leading to her residence were blocked from both sides before policemen entered the house to arrest her, sources said.

The woman was taken for a medical examination and later, produced before the court of Additional Chief Judicial Magistrate Vineet Kumar, who sent her to 14 days' judicial custody, officials said.

SIT chief Arora said forensic examination of the evidence, including pen drive and mobile phones, revealed that there was no addition, alteration, morphing, modification or editing in the videos.

The mobile location and calls made by the student and others were also verified and a chart was prepared which showed that the four (the law student and the three already arrested) were together and in touch, he said.

On the spectacles used for filming Chinmayanand, Arora said, "It was brought online in March by the girl. The girl said it was in her hostel room, which was opened in presence of a forensic team, principal, the girl and her father, but it was not found. We are yet to recover it."

The SIT chief said the mobile messages deleted by Chinmayanand could not be retrieved by the FSL and hence, it has been sent to the Central Forensic Science Laboratory (CFSL) in Gandhi Nagar, Gujarat.

The three others accused in the extortion case -- Sanjay Singh, Sachin Sengar, Vikram, alias Durgesh -- were arrested by the SIT on Friday, the day Chinmayanand was arrested.

The woman and the trio have been booked under IPC sections 385 (extortion), 506 (criminal intimidation), 201(disappearance of evidences), 35 (criminal act done with a criminal knowledge or intention) and 67 of the Information Technology Act, police said.

The law student's father and brother alleged that she was arrested even though she did not commit any crime. Her father claimed that a police official was taking "a very soft stand" on the complaint against Chinmayanand.

The student has accused the BJP leader of raping and physically exploiting her for over a year.

Chinmayanand's own bail application was rejected on Monday by the Shahjahanpur chief judicial magistrate, who said it should be moved in the sessions court, his counsel Om Singh said.

The CJM's court had also rejected the bail application of three men who were arrested on extortion charges filed by the BJP leader.

On Monday, the Allahabad High Court had refused to grant interim bail to the student and directed her to file a fresh petition before an appropriate bench.

"This bench was nominated to the case only for monitoring the investigation in this matter and has no jurisdiction to pass order on stay of arrest," it said.

The SIT has obtained the remand of Sachin Sengar and Vikram -- two of three men arrested in the extortion case -- for 95 hours to help trace the mobile phone used in the alleged extortion bid.

The police have also sent the mobile phone of Chinmayanand's counsel Om Singh, on which the message demanding money was allegedly received, for forensic examination, sources have said.

Chinmayanand, sent to judicial custody after his arrest, was booked under section 376C of the IPC, which is usually applied in cases where a person abuses his position to "induce or seduce" a woman under his charge to have "sexual intercourse not amounting to the offence of rape".

This is a lesser charge than section 376, under which a rape convict faces a maximum punishment of life imprisonment. The punishment under section 376C is between five and 10 years in jail.

He was also booked under sections 354 D (stalking), 342 (wrongful confinement) and 506 (criminal intimidation) of the Indian Penal Code.

The student has claimed that the police were trying to weaken the case against the ruling party politician.

The high court on Monday expressed satisfaction with the progress report submitted by the special investigation team.