The minister said solution can emerge from the government-farmers talks as well as from the SC-appointed panel's deliberations. 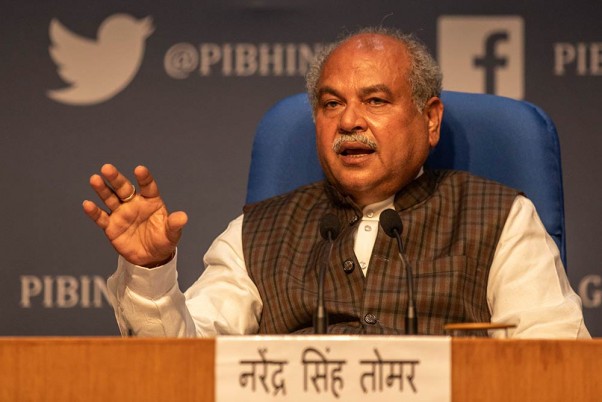 Agriculture minister Narendra Singh Tomar urges farmer unions to form an informal group among themselves to prepare concrete proposals to be discussed in the next meeting. Earlier today, detailed discussions took place between government and farmer unions at the ninth round of talks but could not reach a decisive stage.

Tomar told reporters after the end of the meeting that lasted for nearly five hours that the two sides could not reach any decisive stage, therefore, decided to meet again on January 19 at 12 pm,

Farmers' Protest: Ninth Round Of Talks Between Farm Leaders And Centre Begin

Be A Bit More Flexible, Tomar Tells Farm Union Leaders During Ninth Round Of Talks

"We suggested they can form an informal group of people who can understand the laws better and prepare some concrete proposals, detailing what are farmers' expectations and what clauses are problematic for them, which the government can consider with an open mind," the minister said.

He further said the government is hopeful of discussions reaching some decisive stage at the tenth round of talks on January 19.

On the direct talks between the government and farmers continuing despite the Supreme Court appointing a panel, Tomar said everyone is fully committed to the apex court and the government will also present its side before the committee panel when invited.

"Unions want to continue the dialogue with the government and we have no problem with that. The SC-appointed panel will also work for the welfare of farmers," he said.

The minister said solution can emerge from the government-farmers talks as well as from the SC-appointed panel's deliberations.

"Our effort is to resolve the issue through dialogue and we want the protest to end at the earliest given the adverse weather conditions and the Covid-19 pandemic situation," he said.

On Cong leader Rahul Gandhi's allegations against the government with regard to the farm laws, Tomar said, "Rahul Gandhi's statements and actions are laughed at within his own party also."

"The Congress manifesto in 2019 itself promised these reforms and therefore Sonia and Rahul Gandhi should tell us whether they were lying at that time or are lying right now," he said.