The killing of eight cops in Kanpur by a gangster's men is an absolute tragedy, says former UP police chief Anand Lal Banerjee. 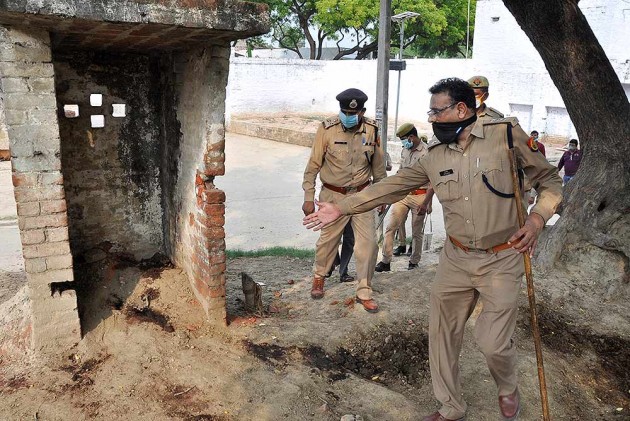 It’s not everyday that you wake up to such tragic news. What happened in Kanpur in the wee hours of Friday is an absolute tragedy. Eight police persons, who existed in flesh and blood, with emotions and imperfections, were gunned down by a gangster's men. I did not know any of the fallen cops personally, yet I feel I’ve lost a part of my body. The ties of khaki are often thicker than ties of blood.

I sat on the edge of my bed for a long time, reading on my phone whatever information kept trickling in regarding the shootout. One of the men was 54 years old. He must have been winding up his life now, thinking about retirement, building a house, and worrying about settling his kids. One was 23, just starting his life, full of hope, perhaps with old parents to take care of, and younger siblings to support.

These killings bring back the memory of RK Singh, a sub-inspector and a dear friend, who was killed in 1997 in Lucknow by Shri Prakash Shukla, the most dreaded gangster of Uttar Pradesh at that time. Singh was a mostly solemn person, tall, vegetarian, and somebody you could trust your life with – I certainly did a few times, and he guarded it with supreme commitment.

When I was the SP (rural) of Gorakhpur in the early 1980s, I’d often go on a night patrol with him on his bike. I’d be driving and he’d be on the pillion. Even after our career tracks parted we never lost touch – it was always him who made the effort of reaching out. I was posted in Lucknow when Singh fell to a criminal’s bullet. Every member of my family wept that day. His death had diminished us.

A cop’s job is principally a thankless job. August Vollmer, the first police chief of Berkeley, California and regarded as the father of modern policing, noted, “The policeman is denounced by the public, criticized by the preacher, ridiculed by movies, berated by newspapers and unsupported by the prosecuting officers and judges. He is shunned by the respectable, he is exposed to countless temptations and dangers, condemned while he enforces the law and dismissed while does not.”

It’s only in death that the society – the public and the press, the politician and the preacher – sees us as human. But for us, the death of a fellow cop is the lowest point in our lives. There are very few incentives for working in the police force. One of them certainly is camaraderie, the lifelong ties we develop, for having braved dangers together, and having been with each other through thick and thin. And when one of us falls, their death carves a great void in us.

Had we been better trained, better equipped, and better planned, these brave cops would have been alive. In future, we should be. Police lives matter.

(As told to Salik Ahmad)