According to forest officials, there are 40 active fire spots in the forests of Garhwal and Kumaon regions with Nainital, Almora, Tehri and Pauri districts being the worst-hit. 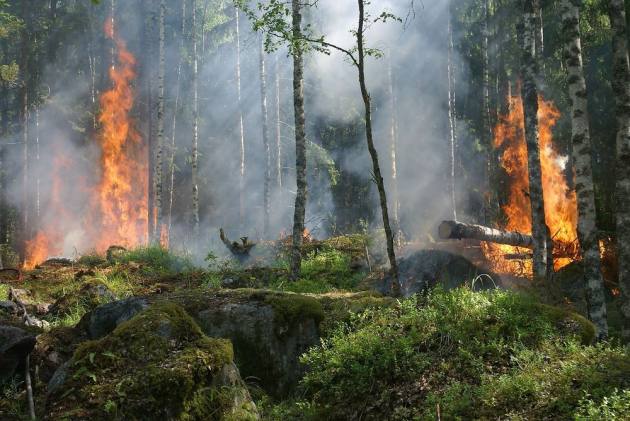 In view of the raging forest fires in various parts of Uttarakhand, the Uttarakhand High Court has asked the state government to find out the possibility of using artificial rain to douse wildfires.

The court further directed the authorities that the forest fires be extinguished in two weeks.

According to forest officials, there are 40 active fire spots in the forests of Garhwal and Kumaon regions with Nainital, Almora, Tehri and Pauri districts being the worst-hit.

David Vs Goliath: Uttarakhand Forest Minister Tries To Douse A Forest Fire With A Shrub In Viral Video

Taking suo motu cognizance of a PIL seeking protection of forest wealth and wildlife, Chief Justice of the high court RS Chauhan and Justice Alok Kumar Verma on Wednesday asked whether artificial rainfall can be executed to extinguish the forest blaze.

Pointing out that the National Green Tribunal's 12-point guidelines issued during the forest fires of 2017 had not been implemented till date, the high court instructed the government to implement them within six months and make permanent arrangements for the disposal of forest fires.

It also issued directions to the state government to fill 60 per cent of vacancies in the forest department within six months.

The court said gram panchayats must be strengthened so that they could monitor the forests throughout the year.

The court also directed the government to provide budget to NDRF and SDRF and deploy them as well as helicopters to overcome the fires.

The court had directed Rajiv Bhartari the Principal Chief Conservator of Forest of the state to be present virtually in the court. Bhartari informed the court about the policy and technique of fighting the forest fire.

A fresh spell of snow in the high altitude areas of the hill districts and rain in the lower areas on Wednesday partially controlled forest fires in the state.