Amid fears of Covid-19 third wave, minister for state Swami Yatishwaranand was clicked attending a meeting with other ministers with a surgical mask hanging from his toe. 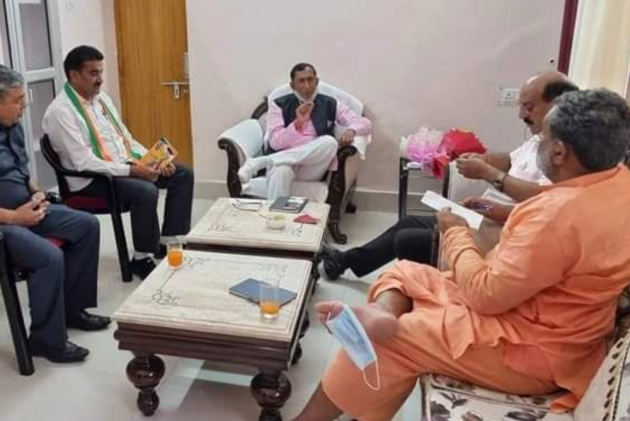 Even as scientists and doctors warn of the imminent third wave of Covid-19, a minister in Uttarakhand has caused outrage after an image of him wearing his mask on his toe during a meeting went viral. In the photo, minister for state Swami Yatishwaranand can be seen attending a meeting with a surgical mask hanging from his toe.

In the photo, Yatishwaranand can be seen accompanied by four others including ministers Bishan Singh Chuphal and Subodh Uniyal. None of the four others are seen wearing masks either.

The image has sparked massive outrage and concern on social media with many accusing the ministers of making light of the urgency of the situation amid reports of an inadvertent third wave.

Opposition leaders were quick to attack the BJP government in Uttarakhand. Congress spokesperson Garima Dasauni took to Twitter and shared the photo, "This is the seriousness of the ruling party's ministers. And then they punish poor people for not wearing masks," she said.

Congress leader Pankaj Punia also mocked the image saying in Hindi, " Learn the right way to use a mask from Uttarakhand Cabinet minister".

Deep Prakash Pan, a leader from the Aam Aadmi Party also took to Twitter to slam the ministers.  "Learn from this cabinet minister in Uttarakhand what the right place is for a mask," he tweeted.

The viral image surfaced a day after the Uttarakhand government on Tuesday cancelled the Kanwar Yatra in view of a possible third wave of COVID-19. The BJP government in Uttarakhand, which underwent a change in command with BJP leader Pushkar Singh Dhami becoming the Chief Minister of the hill state earlier this month.