Uttarakhand: Tug Of War Between Ruling BJP And The Congress 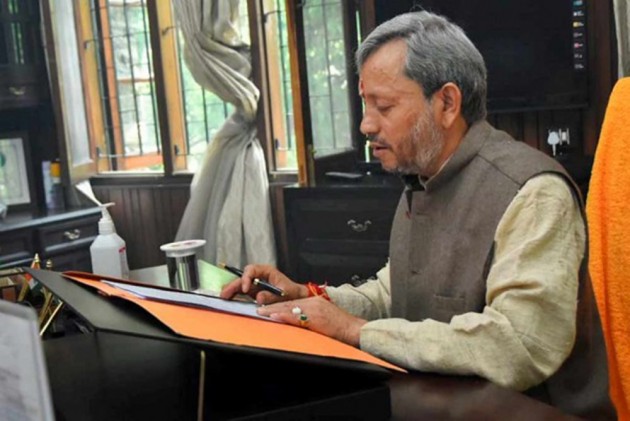 The high drama unfolding within the Congress party’s Punjab unit continues to transfix political observers but there’s another intrigue playing out in nearby Uttarakhand, which like Punjab is due for assembly polls early next year but hasn’t grabbed public imagination for its equally engrossing machinations for power. The Punjab saga is largely limited to the long deepening morass within the state’s ruling Congress party and its two principal actors, Captain Amarinder Singh and his arch-rival Navjot Singh Sidhu. The tale being weaved in Uttarakhand, though shorn of entrancing central characters like the Maharaja of Patiala and the mercurial cricketer-turned-politician in Punjab, is pregnant with clever manoeuvres and stratagems being deployed within both the ruling BJP and the Opposition Congress camps.

The 70-member Uttarakhand assembly is scheduled for polls in February/March next year, along with elections in Punjab, Uttar Pradesh, Manipur and Goa. The hill state attracted some public attention in March this year when the BJP suddenly sacked its then chief minister Trivendra Singh Rawat and appointed Tirath Singh Rawat to the post. The change of guard was forced by the BJP central leadership owing to the increasingly negative feedback it was receiving from within its legislative party and the party organisation against Trivendra. Since then, the state has mostly been in news for the controversial statements that Tirath has made on a wide range of unrelated issues – from the fake Covid test scam during the Haridwar Kumbh Mela to the ‘character’ of women who wear ripped jeans.

However, there’s much more that seems to be happening in the northern state’s politics as it moves closer to the assembly polls. Sources in the state’s Congress and BJP units tell Outlook that both parties are a divided house. Though the mess within the Congress, as people have come to expect in recent years, is far graver, the BJP’s government and state organisation aren’t functioning like a cohesive unit either.

The recent demise of Congress veteran and leader of Opposition in the Uttarakhand assembly, Indira Hridayesh, has necessitated for the Grand Old Party to nominate a new LoP. This, along with other internal issues that haven’t been resolved by the party’s state and central leadership over the past few years, has led to a fresh churn within the faction-ridden organisation. The party’s in-charge of Uttarakhand affairs, Devendra Yadav has been meeting Uttarakhand Congress leaders regularly to put an end to the factional wars but with little success. Yadav’s recent meeting with the party’s 10 Uttarakhand MLAs to decide Hridayesh’s successor in the state assembly was inconclusive. The leaders decided to leave it to interim party president Sonia Gandhi, already beset with the unenviable task of resolving the crises of infighting in Punjab, Rajasthan and Chhattisgarh, to name the new LoP and, if necessary, appoint a new state Congress president too.

Since it was carved out of Uttar Pradesh as a new state two decades ago, Uttarakhand has followed the tradition of voting out an incumbent government. This should have made the electorally atrophying Congress eager to urgently implement correctives for securing a victory and the BJP overtly cautious of falling prey to the state’s electoral custom. The BJP has certainly been proactive in pre-empting potential spoilers and applying remedies, but sources say that just changing the CM hasn’t ended its woes.

A state BJP leader tells Outlook that by replacing one Rawat for the other, the party tried to win over MLAs and the cadre who were unhappy with Trivendra’s style of functioning and his poor administrative skills, but other problems have remained unresolved. “The new state BJP president (Bansidhar Bhagat) has formed a five-member panel to finalise a roadmap for our poll campaign and this panel represents different factions within the party, but this alone is not enough to keep the party together. Tirath Singh Rawat is not a popular leader across all factions of the party. At the state level his popularity may be among some sections of the politically dominant Thakur community but his appeal across the state’s two clear political and regional blocs of Garhwal and Kumaon is very limited; his popularity among the other significant vote bank of the Brahmins is practically non-existent and his administrative skills are no improvement over Trivendra’s,” the senior leader says.

In Uttarakhand, balancing the expectations of voters and political leaders from the Garhwal and Kumaon regions and the Thakur and Brahmin communities has always been a tough act for both the Congress and the BJP as also for the leaders these parties chose as CMs during their cyclical stints in power since 2000. For the ruling BJP, its Tirath Singh Rawat lacks popularity among the Kumaon voters while in Garhwal his influence is limited to a small section of his own community of Thakurs. Another BJP leader from the state tells Outlook that the party’s central leadership is aware of Tirath’s shortcomings and could, as they did in the recent Assam assembly polls, tactfully avoid projecting him as the CM face during the polls next year. “There are too many aspirations that need to be balanced. Tirath wasn’t the most popular choice to be made CM when the party sacked Trivendra… Those who quit the Congress to join the BJP, people like Vijay Bahuguna (a former CM), Satpal Maharaj, Harak Singh Rawat and Yashpal Arya feel they haven’t been suitably rewarded till date for their defection. Senior BJP leaders like Dhan Singh feel the party has taken them for granted and others like former CM BC Khanduri whose son (Manish Khanduri) joined the Congress in 2019 and lost the Lok Sabha poll from Garhwal to Tirath are just waiting to draw blood. Projecting a CM face may be suicidal for us,” the BJP leader says.

For the Congress, things are even more problematic. The party lost half a dozen of its senior most leaders to the BJP five years ago and hasn’t recovered from that blow yet. To make matters worse, its most prominent face in the state’s politics, former CM Harish Rawat is extremely unpopular within the party despite being arguably the only Congress leader who enjoys massive public support across both Garhwal and Kumaon (his home turf) regions though it was he who led the party to its crushing defeat in 2017. The Congress high command had appointed Rawat AICC general secretary and brought him to Delhi in the hope that his intra-party rivals in the state like present Uttarakhand Congress chief and Chakrata MLA Pritam Singh will be able to build a better organisation. Yet, Harish Rawat, presently involved with diffusing the Congress crisis in Punjab, has carefully maintained his grassroots connect in Uttarakhand while insisting all the time that he isn’t keen on any post in state politics. His regular broadsides against Pritam Singh and other factional heads have kept the party in a constant tizzy. Harish has been regularly insisting that the Congress must declare a CM face in Uttarakhand at the earliest; a demand many believe is his way of staking claim for the job and one that could trigger hara-kiri in the party if accepted by the high command.

Congress sources say Harish Rawat may soon be relieved of his charge of Punjab affairs and be sent back to manage the party’s campaign in Uttarakhand. The party high command wants PCC chief Pritam Singh to take over as LoP and make way for a new PCC president. These imminent changes have already created much uproar within the Congress with Singh unwilling to give up his PCC post without the express assurance that if he does vacate this chair, the successor would be of his choosing. Among the names doing the rounds for the new PCC chief are Ganesh Godiyal (a Harish Rawat loyalist), Bhuvan Kapri (Singh’s choice), Prakash Joshi, Manoj Tiwari and MD Joshi.

For the Congress, a resolution of the crises in Punjab and then Rajasthan may be followed up by or run parallel to a similar exercise for Uttarakhand. The only solace that the Congress high command may draw here is that the BJP, in Uttarakhand, isn’t having a smooth ride either. Though the BJP appears to be in a strong position organisationally in Uttarakhand and insists that it will buck anti-incumbency to return to power in the state, the 2022 assembly polls may eventually turn out to be closer than predicted if the current turmoil within the two parties continues unresolved.