Vaccination Of 60-Plus Population Drops After Initial Surge

Hospitals have expressed concern about the slow vaccination rate of 60-plus patients who also have the highest number of comorbidities. 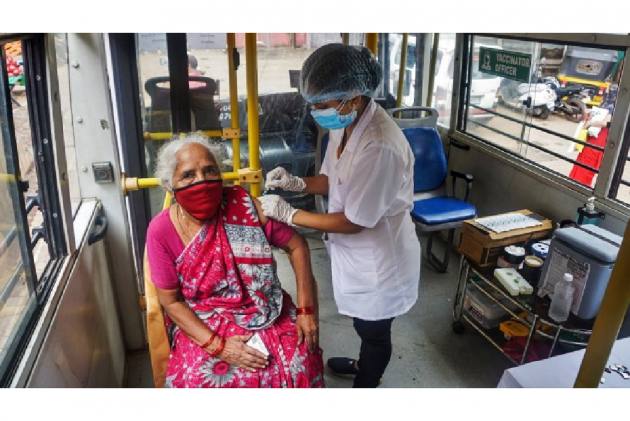 Following an initial surge, the rate of immunisation of the 60-plus age group in India has slowed in recent weeks, with healthcare experts attributing it to mobility challenges as well as disinformation and unjustified apprehensions about the vaccines.

According to Health Ministry data, 2.29 crore senior persons have been fully vaccinated, whereas 6.71 crore have only received one dose of COVID-19 vaccine. The 60-plus population in India is expected to be 14.3 crore in 2021, implying that just 16% of them have been fully immunised up to this point.

Vaccination for persons over the age of 60 and those over the age of 45 with co-morbidities began on March 1 at both government and private facilities. According to the data, between March 13 and April 2, over 80.77 lakh vaccination doses were administered to the 60-plus group every week on average, but the weekly amount decreased to approximately 32 lakh between June 5 and 25.

Delta Covid Variant Is ‘Most Transmissible’, Reported In 85 Countries So Far: WHO

Healthcare experts expressed concern over the slow place of vaccination of the 60-plus people who are more prone to have co-morbidities and remain more susceptible to severe disease.

Dr Sujeet Ranjan, Executive Director of The Coalition for Food and Nutrition Security (CFNS), said myths, misconceptions and rumours about COVID-19 vaccines are the biggest hurdle to vaccination coverage.

"Some people think they will never contract COVID-19, others believe that the virus itself is on the way out. Irrational mistrust of scientifically approved vaccines is also a factor. While vaccine hesitancy has always been a phenomenon in our country, today it tends to accentuated by opinions on social media, where even people with no subject expertise but having wide following can influence people," he said.

"Some people in rural areas believe that COVID-19 is mostly for urban people. Also, many people have heard on the social media that the vaccine and its side-effects will show up two to three years from now. These rumours, suspicion and fear are making it harder to remove vaccine hesitancy," he added.

He said it has also been observed that most public places in rural areas lack senior citizen-friendly infrastructure.

Hospitals have expressed concern over the slow pace of vaccination of 60-plus people who also suffer from the maximum number of comorbidities.

"Among many factors, one is a fear that people with previous heart disease will have some issue because of some unfortunate videos that were circulating around. Some people have done their CRP (c-reactive protein) tests also to see if that was raised and then they feel that they should not take the vaccine," Bajaj said.

Bajaj said mobility is also a very big issue for the 60-plus age group.

"The most important problem is mobility because they are not really able to visit the vaccination centres themselves and also they have a fear that if they go into a crowded place, they will catch Covid. We need to ensure that we educate them about the various risk factors and try to provide vaccination to them at their doorstep," he said.

"As there has been a recent drop in the pace of vaccination among people above the age of 60, there are fears that this vaccine hesitancy can hamper the coverage of this population group most vulnerable to COVID-19," he said.

Dr. Roshan Palresha, Consultant - Emergency Medicine, Columbia Asia Hospital, Pune, said the recent drop in Covid vaccine coverage among the 60-plus group of people is a cause of concern as they are more prone to have comorbidities, and remain more susceptible to severe disease.

“People aged 60 and more must understand that while the number of infected people may go up or down, their vulnerability to the disease and chances of mortality remains the same, and can be reduced only with vaccines," he said.

"In the past we have successfully reduced cases of HIV/AIDS and polio through sustained and focussed media campaigns, and it should help this time too. Government representatives must engage in dialogue with these people and may also come up with non-financial incentives to encourage people," he suggested.

Mahajan said vaccine hesitancy in people over the age of 60 years in India could also be because of misinformation, myth and skepticism.

To counter this, Mahajan suggested that front-line health workers and hospitals should issue statements in favour of vaccination.

"Influential people like film actors, famous personalities should also be tapped to appeal to the public to get vaccinated," he said.