In Delhi, where the drive will begin in 89 centres, Chief Minister Arvind Kejriwal said his AAP government will provide the vaccine free if the Centre fails to do so. 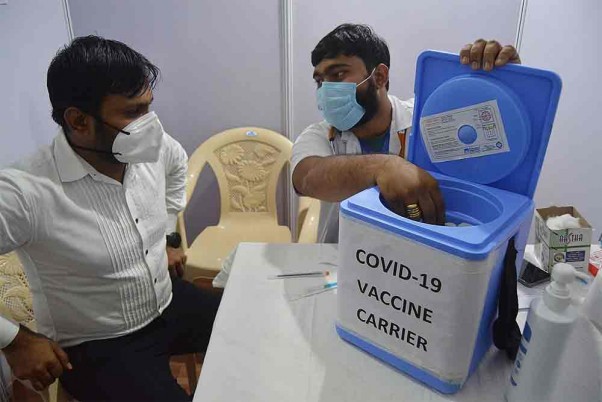 India’s drive against Covid-19 accelerated on Wednesday with planes transporting vaccines to airports across the country. From these airports precious cargo was dispatched to small cities and towns of the country in readiness for the vaccination exercise starting on January 16.

From Assam to Goa and from Jammu and Kashmir to Kerala, the vaccines were transported to far corners of the country carefully and swiftly. This happened a day after the first consignment of the Covishield vaccine from the Oxford/AstraZeneca stable rolled out of the manufacturing facility of Serum Institute of India in Pune.

While Serum Institute of India transported about 56 lakh doses of Covishield to 13 cities, Hyderabad-based Bharat Biotech stated it had successfully moved the indigenous Covaxin, developed in collaboration with the ICMR and the National Institute of Virology, to 11 cities. Bharat Biotech also said it has donated about 16.5 lakh doses to the Centre.

After Serum Institute, Bharat Biotech Rolls Out Covaxin Ahead Of Inoculation Drive

"After having received the government purchase order for 55 lakh doses, the company shipped the first batch of vaccines (each vial containing 20 doses)," Bharat Biotech said in a statement on Wednesday.

It added that the vaccine was sent to Ganavaram, Guwahati, Patna, Delhi, Kurukshetra, Bengaluru, Pune, Bhubaneswar, Jaipur, Chennai and Lucknow.

As the vials began reaching their destinations, in readiness for the pan-India vaccination drive that will be launched on Saturday, states firmed up their plans and fine-tuned logistical details.

In Delhi, where the drive will begin in 89 centres, Chief Minister Arvind Kejriwal said his AAP government will provide the vaccine free if the Centre fails to do so.

He said he has already appealed to the Centre as there are many people in the country who can’t afford the life-saving jab.

In accordance with the national priority list, the vaccine will be first given to healthcare and frontline workers

The first consignment of about 94,000 doses of the Covishield vaccine reached the Madhya Pradesh capital on scheduled flight from Mumbai, a state government official said.

From the airport, insulated vans of the health department transported the boxes -- that signal India entering a decisive phase in its fight against the pandemic -- to the State Vaccine Centre where Medical Education Minister Visvas Sarang inspected the arrangements. The doses will be dispatched to eight districts from Bhopal.

Kerala, too, received its first Covishield vaccine consignment on Wednesday morning on a Go Air flight that landed at Kochi. Another flight was expected to land in Thiruvananthapuram later in the day.

Sources in the National Health Mission sources said of the 4.33 lakh doses of the vaccine, 1,100 will be sent to Mahe, an enclave of Puducherry.

The vaccine will be stored in the regional vaccine centres at Kochi, Thiruvananthapuram and Kozhikode from where it will be distributed to 133 centres.

Giving details of the vaccination plans for Maharashtra, Health Minister Rajesh Tope said the state had already received 9.83 lakh doses of the total requirement of 17.5 lakh for the first phase.

Of these, 9.63 vials were from SII and 20,000 from Bharat Biotech, the state minister told reporters.

"We have to give the doses twice to a person in a gap of four weeks, hence 55 per cent of the around eight lakh registered health workers will undergo vaccination as of now," he said.

The Centre, he said, has asked the state to reduce the number of inoculation centres from 511 to 350, saying the government should focus on other emergencies as well.

Health department staffers of the BMC brought the vaccines from neighbouring Pune under the security with the security of two police vehicles, it said. The civic body has created a centralised cold storage facility for vaccines in Kanjurmarg.

The towns of Aurangabad and Thane in the state got their share of the first doses too.

"The first lot of Covid-19 vaccine for Goa has reached today early morning at 0622 hrs. The two boxes received were expeditiously cleared by TEAM GOA and handed over to Health Services officials," Goa Airport said in a tweet.

Around 18,000 health workers in the coastal state will be covered during the initial phase, another health official said.

The northeast state of Assam received its second consignment of Covid-19 vaccines on a cargo flight of a private airline carrying 12,000 doses of Covaxin.

The freighter ferried three boxes, weighing around 78.5 kg, of the Covid-19 vaccine from Hyderabad to Guwahati.

"The consignment was shipped by Bharat Biotech and handed over to state government officials within six minutes of its arrival," said an Airports Authority of India spokesperson.

The first batch of 2.40 lakh vials of Covid-19 vaccine for Assam and Meghalaya had landed on Tuesday.

Guwahati’s LGBI Airport has been marked as the nodal point of distribution of vaccines for the northeast.

While a consignment for Manipur is also expected to arrive at the airport during the day, Tripura welcomed its first lot of 56,500 Covishield doses in a cargo flight of a private carrier, an official said.

SpiceJet said it had transported 3.5 tonnes of Covid-19 vaccines on Wednesday from Mumbai, Pune and Hyderabad to 11 cities.

GoAir said it will airlift a total of 69,600 vials of the vaccine. The budget carrier also moved 2,400 vials (24,000 doses) of Covishield to Goa from Mumbai's Chhatrapati Shivaji Maharaj International Airport (CSMIA).

The no-frills airline has scheduled flights carrying vaccines to Lucknow, Cochin and Chandigarh as well, besides Goa, during the day, a GoAir spokesperson told PTI.