Varavara Rao Fit To Go Back To Jail From Hospital: NIA To High Court

Varavara Rao, however, will continue to stay in Nanavati Hospital at least till Monday, the next date of hearing on his bail plea 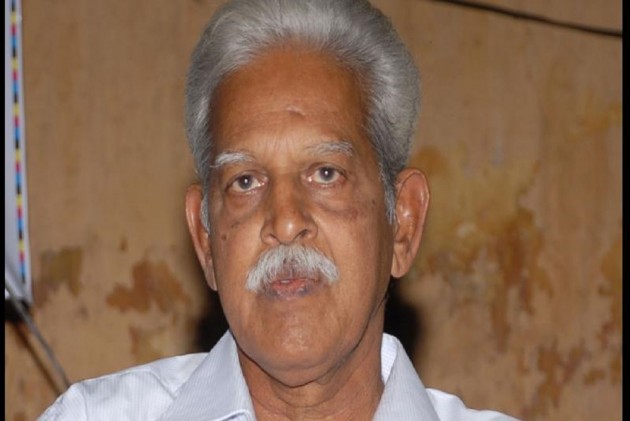 Poet-activist Varavara Rao, an accused in the Elgar Parishad-Maoists links case, is fit enough to be sent back to Taloja jail in Navi Mumbai from a private hospital in Mumbai where he is currently admitted, the National Investigation Agency (NIA) told the Bombay High Court on Tuesday.

Rao, however, will continue to stay in Nanavati Hospital at least till Monday, the next date of hearing on his bail plea on the medical grounds and the plea filed by his wife Hemlatha alleging breach of Rao's fundamental rights due to "continued incarceration without adequate healthcare".

The submission was made by Additional Solicitor General (ASG) Anil Singh, who appeared for the NIA, before a bench of Justices SS Shinde and MS Karnik.

'Not Sure Whether My Husband Will Return Home After NIA Questioning', Says Varavara Rao’s Daughter Pavana

During the day's hearing, senior counsels Indira Jaising and Anand Grover urged the high court to grant bail to Rao.

Grover said the 81-year-old poet was suffering from inherent medical issues since the time of his arrest in 2018.

He said authorities at Taloja prison in Navi Mumbai, where Rao was lodged as an undertrial, did not have the expertise or medical infrastructure to treat him.

Grover further said it would be most suitable for Rao's health if he was granted bail and permitted to go back to his home in Hyderabad.

Rao would not flee if granted bail, Grover added.

"He (Rao) has been tried for 24 cases in his lifetime which is not a joke for anyone, and he has been acquitted in all of them," Grover told the High Court.

"He has been chargesheeted and acquitted. He never absconded and has stood trial and he will stand trial here as well, and that should be considered while granting him bail," Grover argued.

ASG Singh, however, intervened to argue that Rao had applied for bail on medical grounds and hence, his counsels must not argue on the merits of the case.

The bench, however, pointed out that the Supreme Court in its recent order granting interim bail to Republic TV editor-in-chief Arnab Goswami, had held that "under Article 226, a court is not bound by the the prayers in a petition".

"The Supreme Court in Goswami's judgment has also held that the high court has wide powers under 226. It has been made clear by the SC that interim bail can be granted under article 226 which was earlier a grey area.

"The Supreme Court has specifically said that the High Court can give interim bail, even when lower courts have not been approached. There are paragraphs devoted to this," the bench said.

Further hearing was adjourned due to paucity of time.

The bench suggested that since several senior citizen lawyers were appearing in the case, the next hearing on Monday be conducted via video-conferencing.

The bench also said Rao will continue to stay at the Nanavati Hospital till then.

"The earlier order will have to continue. We cannot break the hospital treatment procedure," it said.

On a lighter note, the bench also asked Grover if he remembered any of Rao's poems as his counsel.

Replying in the affirmative, Grover said, "It is a legal poem".

Advocate Jaising requested that Rao's lawyers be permitted to meet him at the hospital.

To this, the bench said lawyers could send written legal correspondence to Rao through his wife, who was permitted to meet him at the hospital.

Rao has been in an out of state-run JJ Hospital in Mumbai and the Taloja prison hospital since his arrest in June 2018.

On July 16 this year, Rao tested positive for coronavirus, after which he was shifted to Nanavati Hospital.

He was discharged following a final assessment report on July 30 and sent back to the Taloja prison.

On November 18, the High Court noted that Rao was 81 years old, suffered from neurological ailments and also needed post-Covid-19 care.

A person was on death bed and in such circumstances, the state government cannot say that he should be treated in the jail, the High Court had said.

Following the High Court's observations, the Maharashtra government on November 18 agreed to shift Rao from Taloja prison to the Nanavati hospital and also to bear the expenses of his treatment.

His and his wife's petitions claimed that he was suffering from several ailments.

Rao and a few other left-leaning activists were arrested for alleged links with Naxals following the Elgar Parishad conclave in Pune on December 31, 2017.