Victoria Memorial Hall Turns 100; Was Opened With A Jewelled Key

The edifice, often shown in films, television series and advertisements, as a representative image of Kolkata, was designed by William Emerson, the chief architect, with inputs from the supervising architect, Vincent Jerome Esch. 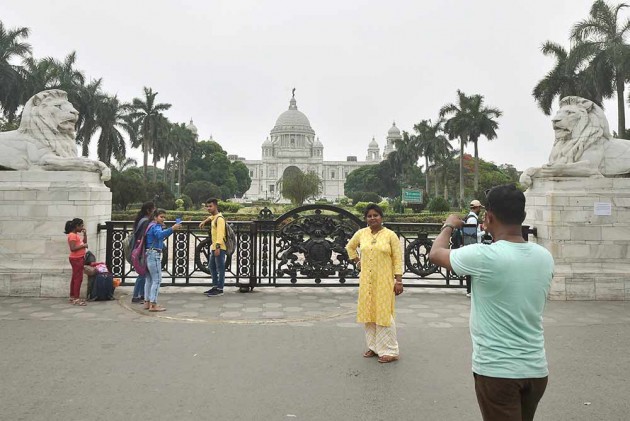 Victoria Memorial Hall, an architectural marvel which was conceived in 1901 as a magnificent monument to the Queen and also as a "Valhalla of the Indian Empire", has completed 100 years of its existence. The marble beauty, one of the most admired and photographed heritage buildings in the country, was inaugurated on December 28, 1921 in Calcutta (now Kolkata) by the then Prince of Wales during his royal tour of India.

According to the old archival records, accessed by PTI, "a jewelled key" was presented to the royal guest by noted industrialist Sir Rajendra Nath Mookerjee on behalf of the contractors, with which the Prince of Wales unlocked the door. A galaxy of other dignitaries, including the then Governor of Bengal Lord Ronaldshay, were present during the event. Unlike the pomp and splendour witnessed during the opening ceremony of the 'All India Queen Victoria Memorial', the day of centenary of its inauguration rather went past in a blip on Tuesday.

While the foundation stone of this celebrated monument was laid by the then Prince of Wales (later King George V) on January 4, 1906, the marble marvel was inaugurated by his son and the then Prince of Wales (later King Edward VIII), who was sent to India by him on a goodwill tour after the end of the First World War (1914-1918), as per old archival records.

Incidentally, when the foundation stone of the building was laid, Calcutta -- the Second City of the British Empire -- was the capital of the British Raj, but in the 1911 Delhi Durbar, King George V had announced to shift it to Delhi, and when the memorial was inaugurated, the new capital in Delhi was still under construction, and Calcutta was no more the imperial seat of administration of the British Raj.

As the resplendent hall, designed with a museum housed within its realms, and endowed with priceless paintings, sculptures, photographs, and other artworks, turned 100 on Tuesday, it shared on its Facebook page, some of the very rare archival images of its construction, and wrote, "100 years ago, on this day, Victoria Memorial Hall opened its doors to the public. Here's how it started... #vmhonline #vmhcentenary #victoriamemorialhall #kolkatavintage".

The edifice, often shown in films, television series and advertisements, as a representative image of Kolkata, was designed by William Emerson, the chief architect, with inputs from the supervising architect, Vincent Jerome Esch. It used Indian marble from the Makrana quarries, as used in building the Taj Mahal, according to Victorianweb.com. Surrounding the iconic dome of the Victoria Memorial Hall are ornate allegorical sculptures of 'Art', 'Architecture', 'Justice', and 'Charity', and above its North Porch are 'Motherhood', 'Prudence' and 'Learning'.

Representing the resplendent and majestic British architecture, the Victoria Memorial Hall stands today at the Maidan, as a veritable icon of the city of Kolkata. Spread across 57 acres of land, the building, famously referred to as just 'Victoria' is located, well on 1, Queensway, and was envisaged by Lord Curzon, the then Viceroy of India, as a memorial to the Queen after her demise in 1901.

She ruled as the Empress of India from her throne in England, for over 60 years, and the Victoria Memorial Hall has a magnificent standing marble-made statue of Victoria, in her youth, by Thomas Brock, placed in the Queen's Hall below the rotunda, while a monumental bronze sculpture of her as an ageing queen in a sitting posture, sculpted by artist George Frampton, is placed in the garden area, in front of the building. According to VMH website, 21 gardens are part of its sprawling campus, and the Hall possesses 28,394 artefacts, 3,900 paintings, including rare works by the Daniells. It is topped by an enormous (16-ft high, 3-tonne) bronze Angel of Victory which is capable of revolving, according to Victorianweb.com.

Many architecture, heritage and Calcutta lovers have taken to social media to share posts on the centenary of the inauguration of the magnificent monument. The VMH also shared on Facebook two rare photographs from its inauguration by the then Prince of Wales who had also spent his Christmas day in Calcutta after arriving there on December 24 from Patna, as part of his royal tour. "100 and going strong! Two photographs from 28 December 1921, when the Victoria Memorial Hall opened to the public as a museum," the VMH captioned the post.

The building was envisioned as a grand building with a museum and gardens, and the Viceroy had said, "Let us, therefore, have a building, stately, spacious, monumental and grand, to which every newcomer in Calcutta will turn, to which all the resident population, European and Native, will flock, where all classes will learn the lessons of history, and see revived before their eyes the marvels of the past."

As per the VMH website, "Hence, according to Curzon, this memorial should take form of a great marble hall, which was to be erected on the Calcutta maidan to serve primarily as a monument to the Queen and secondarily as a national gallery and Valhalla of the Indian Empire".

On the conception of the memorial, the website says, "Within a few weeks after the Queen's death in January 1901, a great meeting was convened in the Town Hall of Calcutta on February 6, 1901, whereby a resolution for constituting an all Indian memorial fund for building of the memorial was moved." The princes and people of India had responded generously to the appeal for funds, it said.