The video was reportedly shot in the Mardol area of Goa, and shows a group of young boys playing in a football field when the ball lands near the cow, and it takes charge. 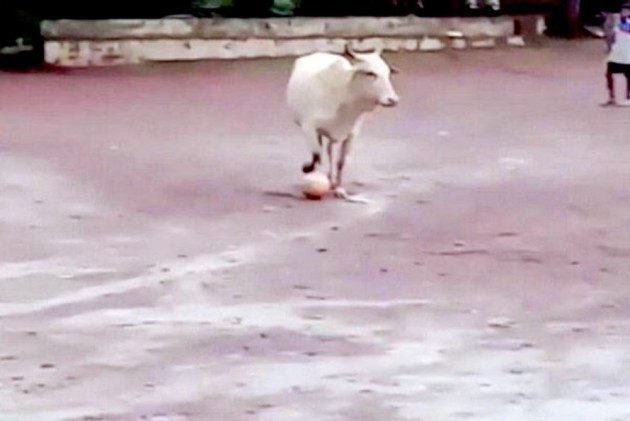 Video of a cow playing football in Goa has gone viral all over the social media, and has stirred hype among the people.

After some #hard #rain reporting news, here's a funny video, of a cow playing #football on a ground in #Goa pic.twitter.com/6w3H3jTi80

The video has received a huge number of views, and is being widely shared on social media, including WhatsApp, with people giving funny reactions to it.

The video was reportedly shot in the Mardol area of Goa, and shows a group of young boys playing in a football field when the ball lands near the cow, and it takes charge.

The cow in the video is seen kicking and pushing the ball with its nose, while the rest of the players try to catch up.

One of the players successfully manages to take the ball away from the cow, and the rest of the players pass it around so that the animal can't get it.

However, the cow tracks every pass the players make, and even gets the ball back, with one player preferring to leave the ball rather than take it on.

People are immensely thrilled with the video, commenting it can be a great value addition to the Indian Football Team.