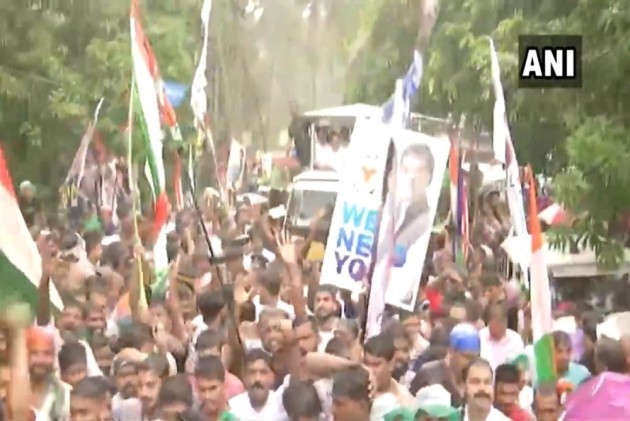 Almost two weeks after the Congress was once again routed across the country, its president Rahul Gandhi on Friday arrived in Kerala, the only silver lining in the grand old party's Lok Sabha campaign this year.

"We are with you," read one of the several flags fluttering in the street. Despite rains, the people thronged the streets as their new MP, who is on a three-day thanksgiving visit, waived and blew kisses to them.

In the recently concluded Lok Sabha polls, Gandhi won from Wayanad by a margin of over 4.31 lakh votes, a state record, even as he lost Congress stronghold Amethi in Uttar Pradesh to BJP's Smriti Irani.

The Congress president arrived at Kozhikode airport around 2 pm and is scheduled to participate in at least 15 public receptions across the constituency, spread over in the districts of Wayanad, Malappuram and Kozhikode.

His first programme is expected to be at Kalikavu in Malappuram district on Friday evening, sources said.

A senior Congress leader from the constituency told PTI that Gandhi's visit will boost the morale of the party workers to fight the Assembly by-elections.

"He will also take part in roadshows at Nilambur and Eranad," senior Congress leader and Wandoor MLA A P Anil Kumar told PTI.

After visiting the facilitation centre at Wayanad collectorate, Gandhi will take part in various public functions organised by the party in the constituency.

He will be accorded reception at Kalpetta, Kambalkadu, Panamaram, Mananthavadi, Pulpally and Sultan Batheri and will also attend a roadshow in Kozhikode Assembly constituency on June 9, before leaving for Delhi.

In his first communication as an MP, Gandhi had written to Kerala Chief Minister Pinarayi Vijayan regarding the suicide of a farmer in Wayanad.

Vijayan had responded in a letter that the issue of providing relief to the families of farmers who committed suicide over failure to repay bank loans, needs to be taken up in parliament.

Gandhi is likely to visit the family of the 53-year-old farmer, Dinesh Kumar, who had ended his life after consuming a poisonous substance on May 23 at Panamaram in the constituency, party sources said.

Earlier in the day, Gandhi tweeted, "I will be in Wayanad, Kerala, starting this afternoon and till Sunday to meet citizens and Congress party workers. It's a packed schedule with over 15 public receptions planned over the next three days."