In a letter to the EC, BJP attached links of the video showing an ex-minister and a TMC candidate from Purulia purportedly distributing cash among the voters. 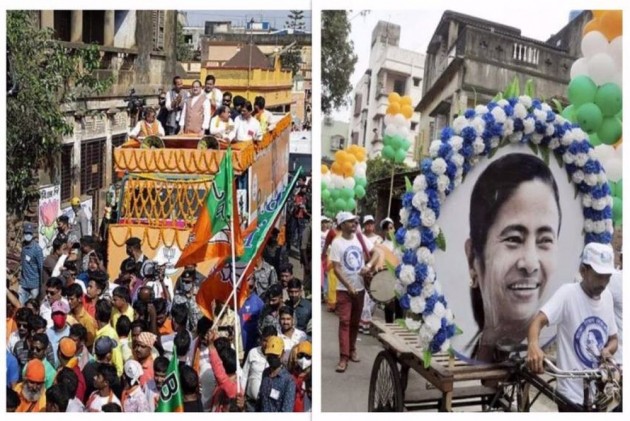 The BJP moved the Election Commission on Friday to draw its attention to a video in which a purpoted Trinamool Congress candidate is allegedly seen distributing cash among the electorate ahead of Assembly elections in West Bengal.

The saffron party complained about TMC workers allegedly "unleashing terror" in poll-bound districts in collusion with a section of the state police.

In a letter to the poll panel, the BJP attached links of the video, released on Friday, which showed an ex-minister and a TMC candidate from Purulia purportedly distributing cash among the voters.

"It is a blatant violation of the model code of conduct that says all parties and candidates shall avoid scrupulously all activities which are corrupt practices and offences under the election law," the letter signed by senior state BJP leaders said.

The TMC denied the charge, alleging that the video was doctored and said it was the saffron party leaders "bringing in outsiders with bagfuls of cash to bribe the electorate".

"They should be suspended forthwith for not executing their official work with due diligence, and helping the Trinamool Congress and its members in carrying out malpractice, irregularities," it said.

In another complaint to the EC, the BJP demanded immediate and necessary action against the "continuous targeted political killings of its workers to create fear psychosis and get electoral gains".