RSS chief Mohan Bhagwat criticised the Mamata Banerjee-led West Bengal administration for the violence that erupted in the state during the Lok Sabha elections and has continued since then. 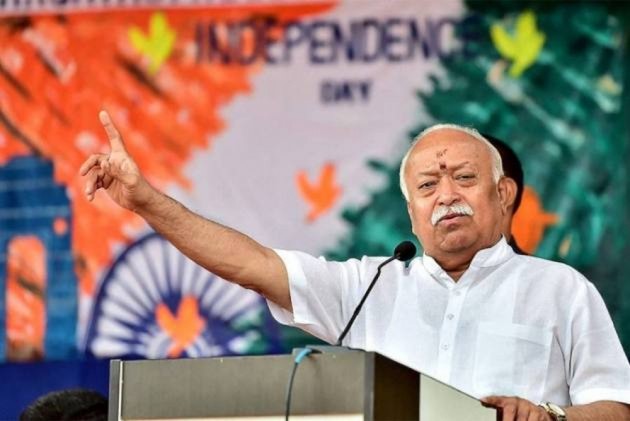 RSS chief Mohan Bhagwat has targeted West Bengal Chief Minister Mamata Banerjee over the political violence, attributing the happenings in the state to her "desperation" for power.

It is the responsibility of the (Mamata) government to act in the interest of the people and implement law and order through strict action, Bhagwat said.

Bhagwat criticised the West Bengal administration for the violence that erupted in the state during the Lok Sabha elections and has continued since then.

"What is happening in West Bengal?" he asked. "Has anything like this ever happened? Action should be taken by the administration," Bhagwat said, at the concluding programme of the third year of training scheduled for RSS volunteers in Nagpur on- Sunday night.

Lamenting the political killings in West Bengal, he said those being killed may belong to a certain party, but calling people who protest such kilings as outsiders is wrong.

Banerjee has often blamed "outsiders" for causing trouble in the state.

"Whatever is happening in West Bengal should not happen. It is not happening in other states. If some goons and those with aggressive tendencies are resorting to this, the administration should step in to curb it. It is the duty of the state to implement law and order," Bhagwat said.

"Killings are happening there. Those killed might belong to some party, and the assailants might belong to a party or maybe goons. But to say that outsiders have come to West Bengal and whether they want to live in the state, such language is used," he said.

In an apparent reference to the construction of Ram temple in Ayodhya, Bhagwat said people of the country have reposed faith in the present government for the promises fulfilled by them in the last five years, although some of them still need to fulfilled.

"The Sangh and the society are voters and not contestants. We put in our efforts for 100 per cent voting and we think our efforts are bearing fruits though it may not be 100 per cent," he said.

Bhagwat said people are learning from every election and voting with maturity for the unity and progress of the country.