The move comes a day after violence broke out between the Bharatiya Janata Party (BJP) and Trinamool Congress (TMC) supporters during a roadshow held by BJP president Amit Shah. 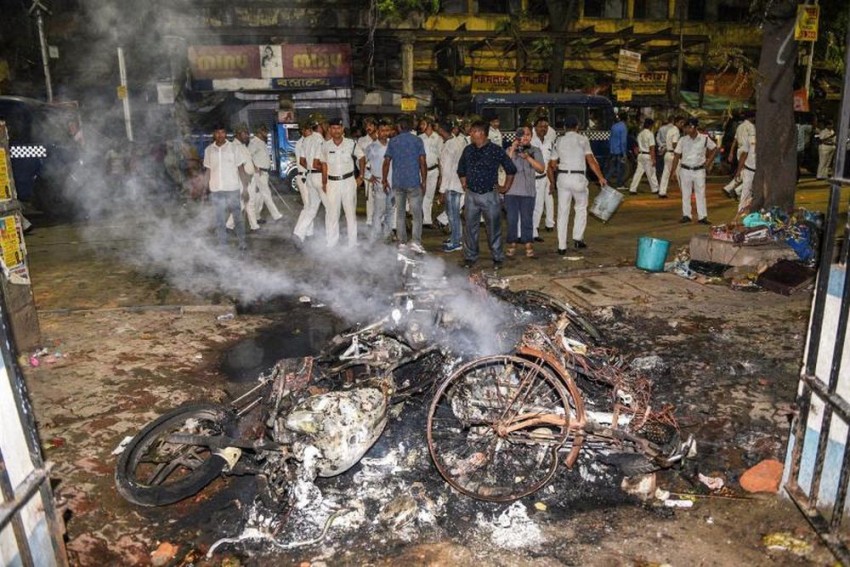 Violence broke out during an Amit Shah roadshow in Kolkata on Tuesday evening.
Outlook Web Bureau May 15, 2019 00:00 IST Violence In West Bengal: 'Anguished' EC Orders End Of Campaigning From Thursday

The Election Commission of India (ECI) on Wednesday directed all political parties conclude campaigning in West Bengal before 10 PM on Thursday, a day before it was scheduled to end.

The EC has invoked article 324 for the first time to curtail campaigning, an official announced in a press conference today.

The EC said that there won't be any election campaigning in nine parliamentary constituencies of West Bengal -- Dum Dum, Barasat, Basirhat, Jaynagar, Mathurapur, Jadavpur, Diamond Harbour, South and North Kolkata -- from Thursday 10 PM, till the conclusion of polls.

"The Commission is deeply anguished at the vandalism done to the statue of Vidyasagar. It is hoped that the vandals are traced by the state administration," it said.

The EC also ordered the removal of Principal Secretary (Home) and Additional Director General, CID from their postings in West Bengal.

The move comes a day after violence broke out between the Bharatiya Janata Party (BJP) and Trinamool Congress (TMC) supporters during a roadshow held by BJP president Amit Shah on Kolkata.

Earlier in the day, allegations and counter-allegations flew thick and fast between the Bharatiya Janata Party (BJP) and Trinamool Congress over the violence.

The political ecosystem in the state turned ugly on Tuesday evening when sticks were allegedly thrown at BJP President Amit Shah's campaign truck during his roadshow in the city of joy.

Clashes broke out between BJP supporters and Trinamool Chhatra Parishad (TMCP) activists and the police had to intervene and lathi-charge the crowd to take control of the situation.

Shah had alleged that TMC goons were frustrated after seeing the rise of the saffron party in West Bengal and hence resorted to violence.

On Wednesday, Shah launched a fresh salvo on Mamata, saying the TMC had engineered violence during his road show.

“We will not be intimidated by violence, he said, adding, "anger of Bengalis will translate into a defeat for Mamata didi who is stifling democracy in the state."

“I am told Bengal government has filed an FIR against me. Let me tell them I am not scared of FIRs," he said.

"Streets of Kolkata tinged with shock, anger. We will take videos we have to EC; we are authenticating them on record," Derek said.

TMC has also claimed that the BJP had brought "goons" from outside the state.

Lok Sabha Elections 2019: Why West Bengal Has Emerged As The Most Violent Battleground