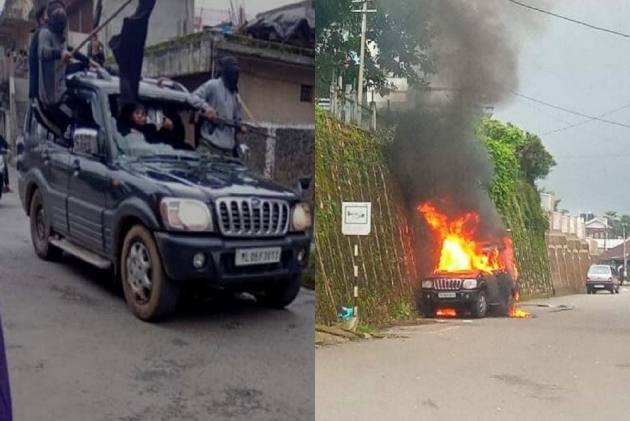 Meghalaya home minister Lahkmen Rymbui resigned on Sunday amidst unrest in protest against the killing of surrendered leader of the banned HNLC, Cheristerfield Thangkhiew, by the police early on Friday.

Earlier in the day, the government clamped curfew on the state capital, Shillong, and also banned mobile internet/data services in four districts of the state after violence rocked the city over what is being alleged as “fake encounter” in which Thangkhiew was killed.

In his letter to the chief minister Conrad Sangma on Sunday evening, Rymbui said he wanted to be relieved of the home department to facilitate “free and fair" inquiry by the government into the killing of the former militant leader. He also proposed a judicial inquiry, a demand raised by several quarters, into the incident.

“Considering the gravity of the situation, I would request you to relieve the Home Department from me with immediate effect. This will facilitate free and fair enquiry taken by the government to bring out the truth of the incident. I propose judicial enquiry be conductde,” the letter said.

Rymbui is also minister of border areas, education and district council affairs. He belongs to the United Democratic party, which is a constituent of the Meghalaya Democratic Alliance government.

Thangkhiew’s funeral was held on Sunday afternoon with a large number of people taking out a motorcycle procession carrying black flags to protest against the “fake encounter.”
The curfew was ordered from 8 pm of Sunday till 5 am of August 17 while mobile internet/data services was banned for  48 hours beginning 6 pm of Sunday.

Imposing the curfew, a government order cited incidents of stone-pelting, arson and “serous breakdown of law and order in parts of Shillong city”. It said there was likelihood of further breach of peace which may lead to incidents “causing loss of life and property” and that such incidents could spread to other areas.

In one such incident, unidentified miscreants reportedly snatched a vehicle from police and later torched it. The miscreants attacked the vehicle belonging to Mawkynroh Police Outpost raining stones on it from all around forcing the policemen to flee. The vehicle was damaged. They then drove away the SUV to Jaiaw where they set it ablaze. Incidents of stone-pelting on vehicles were reported from some other areas of the city, too.

Thangkhiew was killed in an encounter in his house in retaliatory fire by policemen after he allegedly attacked them with a knife when they raided his house.

A joint team of East Jaintia Hills and East Khasi Hills police conducted the raid in connection with the recent blasts in the state, the latest being at Shillong last week in which two persons were injured.

Police said they had to open fire after the 56-year-old former general secretary of the outfit attacked them with a knife.

The chief minister on Saturday said the police had credible information of another blast being planned at a certain location in Shillong and needed to act swiftly. “Inquiries into the blasts at East Jaintia Hills and Shillong had revealed the involvement of several people including  Cheristerfield. Following the Shillong blast, police received intelligence reports of a similar blast being planned and needed to take preventive action in the interest of the state and the people,” he told reporters.

The killing has evoked sharp reactions from several quarters, including  Thangkhiew’s family who said it was a fake encounter. The HNLC, on the other hand, has vowed revenge on the state home minister. Banners and posters appeared in Shillong on Saturday calling for his resignation over the incident. Rights activists have also called for an independent probe into the incident to ascertain the facts.

On the HNLC’s offer to hold talks earlier this year, Sangma said the matter was discussed in the state government and with the Centre as well. The Centre ruled out accepting certain conditions laid down by them and wanted that they submit the letter again. “This was conveyed to them and they agreed to send another letter which they are yet to do,” he said. “While all this was going on they resorted to triggering the blasts,” he said adding it was not clear what their intentions were.

Thangkhiew, who was a founding member of the HNLC,  had surrendered at Shillong in October, 2018. He had joined the Hynniewtrep Achik Liberation Council (HALC), the first militant outfit of the state, in August 1987.  HALC was subsequently disbanded and HNLC was floated in 1997. He had gone into hiding in Bangladesh in 2004 and remained in the neighbouring country till giving himself up in 2018.