DMK MLA Shows The Way, Pulls Down His Birthday Posters From School Wall

DMK MLA R. Manickam was furious upon finding his 62nd birthday posters plastered on a local government school’s compound wall and supervised their removal in person. 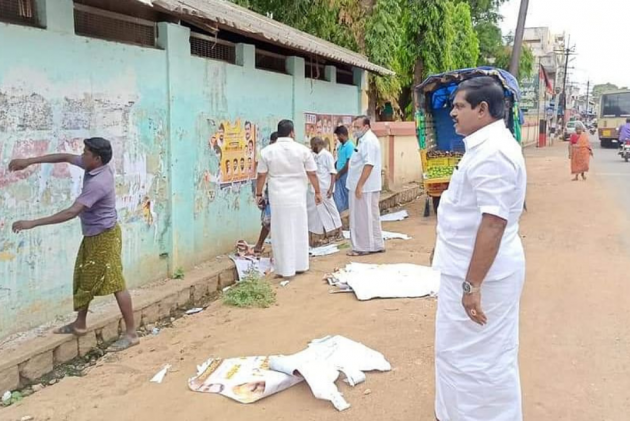 In these days when politicians thrive on sycophancy and enjoy undue praise heaped on them, here is one MLA who will have none of that nonsense. R. Manickam, the DMK MLA from Kultihalai constituency was so angered by posters celebrating his 62nd birthday in the town in Tamil Nadu that he got down from his car and personally got them removed.

The MLA was furious when he noticed on Monday that the local government school’s compound wall was being plastered with posters celebrating his birthday. He got down from his car, summoned his party workers and asked them angrily, “Whose handiwork is this? You people know I don’t like such stuff. I am going to remain here till all the posters are torn off the school wall,” he declared.

For the next one hour, he stood by the roadside and made sure that all the posters were removed. He also called the local DMK functionary and fired him for organizing the posters and asked him to get the school wall freshly painted. The MLA also instructed the functionary to consult the school teachers to select a few of their preferred “Thirukkural” (Tamil couplets) and have them painted on the walls.

“I never celebrate my birthday with fanfare. For me, it is a private affair. Just because we are the ruling party my supporters cannot get carried away. When someone informed me that they had also put up some flex banners hindering traffic I called the local police and had them removed,” explained Manickam a farmer and coconut trader. When a few supporters came to his office to convey his birthday wishes he handed over saplings to them asking them to plant them at their homes.