Want To See You As PM Once Again: Mulayam To Modi. PM Says 'Thank You'

"I wish that all members come back to the House," Yadav said during the last sitting of the 16th Lok Sabha, drawing applause from the BJP members who are in a majority in the House. 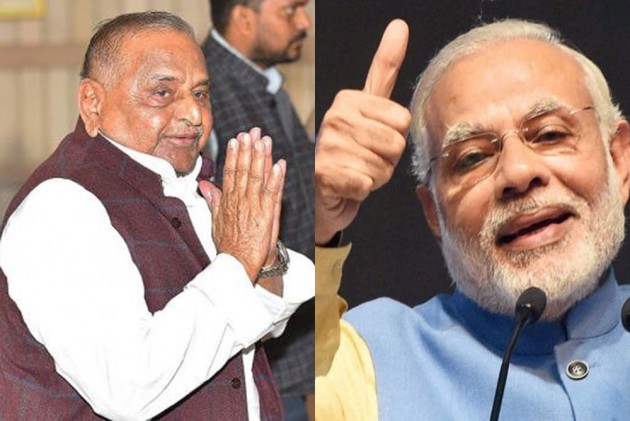 Samajwadi Party patriarch Mulayam Singh Yadav on Wednesday startled everyone in the Lok Sabha with his comments on Prime Minister Narendra Modi, which left the opposition squirming  but were greeted by cheers from the treasury benches.

"I wish that all members come back to the House," Yadav said during the last sitting of the 16th Lok Sabha, drawing applause from the BJP members who are in a majority in the House.

Then, pointing towards the Prime Minister in the Lok Sabha, the senior Yadav said that he wishes that the BJP leader come back as the prime minister.

Ruling alliance members heartily cheered Yadav with chants of "Jai Shri Ram" as he praised Modi for "making efforts to take everyone along".

Subsequently, when it was the prime minister's turn to speak in the house, Modi duly acknowledged the SP patriarch's praise with folded hands and later made mention of Yadav's "blessings" in his speech and thanked him.

The Samajwadi Party, which is led by Mulayam's son Akhilesh Yadav, has joined hands with the BSP in Uttar Pradesh to take on the BJP in the upcoming Lok Sabha elections.