'We wanted to make the BJP stronger and its heft has increased unquestionably,' Chirag Paswan said 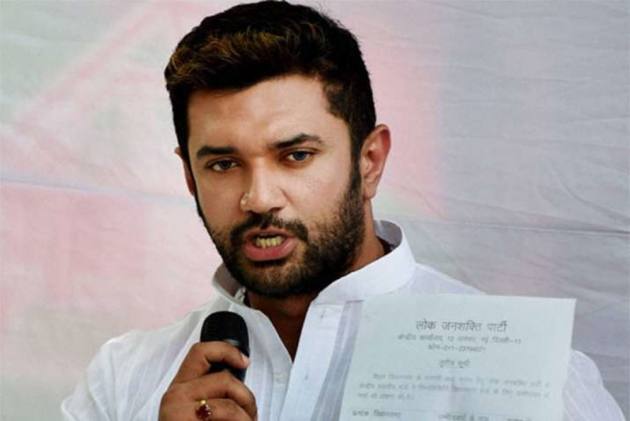 LJP leader Chirag Paswan on Wednesday defended his decision of fielding candidates against the JD(U) in large numbers in the Bihar assembly polls which hugely damaged its prospects, saying he wanted Nitish Kumar's party to be "emaciated" and succeeded in the endeavour.

He also declared he will not support the new government in Bihar if the NDA stuck to its promise of retaining Nitish Kumar as the chief minister despite the JD(U)'s diminished numbers in the assembly.

"We never concealed our intentions. We believed the JD(U) headed by Kumar needed to be emaciated and we succeeded. We wanted to make the BJP stronger and its heft has increased unquestionably," Paswan said.

Addressing a press conference here, Paswan said he was happy that the BJP had emerged "much bigger and stronger" in Bihar, and ruled out any possibility of a truck with the opposition Grand Alliance, comprising RJD, Congress and three Left parties, citing "ideological differences".

He also asserted that the LJP displayed "courage" in going solo and ended up with a better vote share though it could not convert into seats.

Paswan, whose party fared abysmally securing just one seat in the assembly elections, said the LJP did not wish to carry the tag of "pichhlaggu", the one who rides piggy back.

The 37-year-old, whose brinkmanship has been blamed by leaders like Sushil Kumar Modi, a BJP veteran and Deputy Chief Minister, for the NDA's sub-optimal performance, hopeful that his relations with the BJP at the Centre will not be affected since many allies of the saffron party, including the JD(U), have in the past challenged it electorally in states.

"If anybody deserves to be congratulated on the NDA's victory in Bihar, it is Prime Minister Narendra Modi. People have reposed their trust in his leadership and his vision for 'Atmanirbhar Bihar'. We always wanted to see a government in the state headed by the BJP and supported by the LJP. But we respect the mandate given by the people," Paswan said.

The son of late Union minister Ram Vilas Paswan maintained that "Nitish Kumar as the chief minister is not good for Bihar" and that there was "no question of us supporting a government headed by him".

"It is another thing that the NDA in Bihar comprising BJP, JD(U) and two smaller parties - have the numbers and does not need our support," he added.

Paswan also took exception to the epithet "votekatwa" (spoiler) used for the LJP in the just-concluded elections by many, including Sushil Kumar Modi.

"LJP did make us lose at least 25 seats by playing the votekatwa. Had things been otherwise, the NDA would have crossed the tally of 150 in the 243-strong House," Modi told a news channel.

About Kumar's possibility of retaining the chair despite having won fewer seats than the BJP, Modi said, "Our top leadership had made it clear that he will remain the CM if the NDA achieved power, irrespective of how many seats are won by which party. It is not for me to comment more on issues which are decided in the BJP by its parliamentary board."

Paswan wanted to know why the LJP be talked about in derogatory terms when it had only worked on expanding its base and succeeded in raising the vote share to nearly six per cent, a two-fold rise since 2015. He said the party will emerge stronger in 2025.

About the prospects at the Centre where the LJP is left with no representation in the Narendra Modi cabinet,

Paswan said, "We are in the NDA at the Centre and happenings in Bihar will have no bearing on it. Ramdas Athawale's party has contested in polls against the BJP and the JD(U) has done the same in many states. What we did is not without precedent".

"If the question is whether we would again join the government, have someone from our party as a minister in the Union council of ministers, I would say we would cross the bridge when it comes," he said.

Paswan was also asked about his repeated allegations about corruption in government schemes and threats of sending Nitish Kumar to jail if the LJP became a part of the next government.

"Corruption is there, nobody can deny. It is for the government to investigate things. We will keep supplying evidences whenever we find," the LJP chief said.

He also said he does not think he will ever join hands with RJD leader Tejashwi Yadav or become a part of the Grand Alliance.

"We have ideological differences with them. Though I salute the momentum he generated for the RJD and its allies," he said in reply to a query.