Priya Dutt, former MP and Congress candidate for Lok Sabha elections from Mumbai North Central, speaks to Outlook about her party's promises and present challenges before the country. 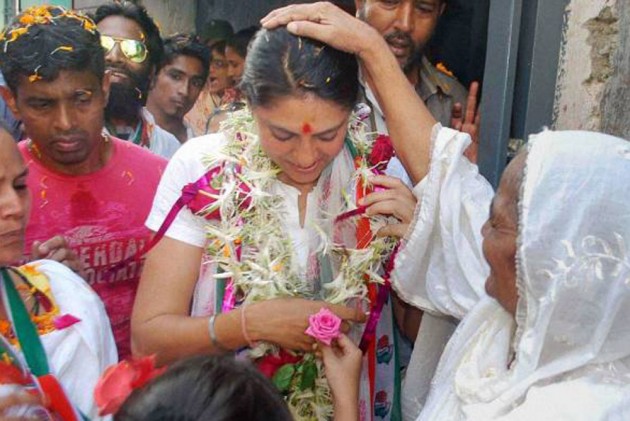 Priya Dutt, former MP and Congress candidate for Lok Sabha elections from Mumbai North Central, speaks to Outlook about her party's promises and present challenges before the country.

What made you change your decision to quit politics?

I was done. I wanted to give time to my family. But then I spoke to Rahul Gandhi. He said we are in this fight together. This is not for the party, not for us, it’s for what our country stands for. So, it really got to me. We can’t give up without giving our best. It is not about power, but about fighting for what is right. I got the opportunity to fight for right by contesting an election, so I am doing it.

Taking A Break, Priya Dutt Opts Out Of 2019 Electoral Race

Do you think NYAY will really be the game changer?

Yes, I think so. Rahul Gandhi is looking at 20% poorest of poor. Rs. 6000 is not going to make the poor sit at home and not work. It is just going to ensure that they have food to eat, water to drink and maybe few health benefits. This is only to ensure that people are not dying of hunger and lack of basic necessities. It’s just a kick-start for their lives. It will be wonderful because once they have some money, their aspirations will increase. They will want to come out and do something more.

The Congress manifesto has promised a lot to one and all.

What I really liked about the manifesto is that it is not a one man’s vision. Rahul Gandhi consulted every stakeholder in the country. It was a democratically done manifesto. It is the voice of the people, the youth, the women, the children.

In Maharashtra, the Congress and NCP have seen some major defections. How will it affect the elections?

During elections, defections happen in every party. Sometimes you have alliances. You have to give up a few seats and strike a balance. You have to look at the bigger picture. Especially this time you must look at the fact that we have come together for the common good of the country.

Mumbai seems to be in a real mess in terms of infrastructure.

You need to have a long-term vision. If you look at this government, they had a complete majority and they had government in the state and corporation alliance. Tell me why they couldn’t do anything in five years? What is their excuse? In the past 10 years we struggled because corporation was not with us. Although we ran a coalition, we ensured completion of several projects such as the SCLR, Milan flyover, new airport (T2), the sea link, elevated Sahar road and LTT station. Even the Metro project plan was made during our time. Every infrastructure project was initiated and completed.

The current government is creating a mess everywhere. For example – look at the mess in Aarey. For Make in India, they spent crores. Nothing came out of it, no one can find any data on it.

A lot has happened in the past five years in India. How do you view it?

I think it has been detrimental at all levels. Economically, we took the biggest hit due to demonetisation. Ours has always been a dual economy – it has been a cash economy and white economy. It doesn’t mean people had black money stashed in their homes. Cash economy was an integral part – every small trader and worker was dealing in cash. It’s fine that the government wanted everyone to have a bank account but look at what happened. People lost jobs. With GST, both small traders and big businesses were hit.

The bigger issue is the communal violence after the beef ban. With the ban, came vigilantism. We saw abuse and violence. That is why every minority group felt insecure and was afraid of speaking up. All of us have been born and brought up to respect faith and religions. Earlier, there was no disrespect for any religion.

Also, the aggression on social media…

The trolls are paid to spew venom and hate. How can this government talk about protection for women? Look at what is happening online. Is sexual abuse allowed online? Many people don’t raise their voice out of fear. And that’s what the trolls want – they want to silence dissent.

Your father worked tirelessly for communal harmony - be it in the 1980s or 90s. You often accompanied him. Does the polarisation affect you personally?

After so many trials and tribulations, our country was finally looking at the bigger picture; we were looking at progress of the new generation. We had done away with caste and religion and we were talking about inclusive growth. In the past five years, we have rolled back and that makes me really sad. There is an innate fear in people to speak up. Every time someone speaks up, they are termed anti-national, Naxal and several other names.

Look at artistes like Naseeruddin Shah and Aamir Khan. And the action taken against students in JNU. Gauri Lankesh was killed. The PM has never spoken up on these issues. But the government changes names of roads and cities. If changing names was their agenda, they should have told this earlier. They sold themselves on a completely different agenda and none of that has been fulfilled.