Watch: 8-Storey Shimla Apartment Collapses Like House Of Cards In Front Of Residents

The Shimla municipal corporation had asked the families to vacate the hill-top property as soon as possible 15 days ago due to potential danger. But some had remained put. 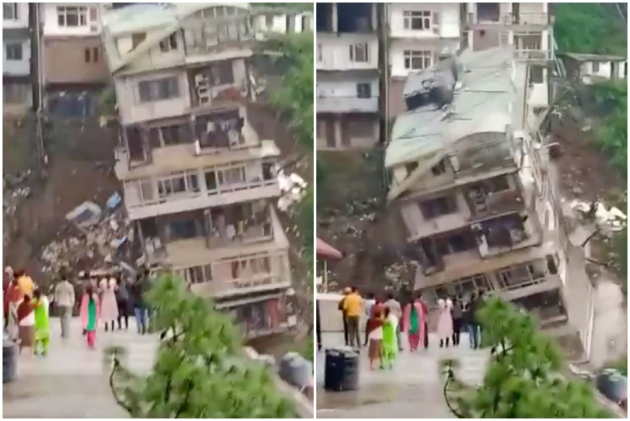 A major disaster in was averted in Shimla, Himachal Pradesh, on Thursday after an eight- storey apartment building collapsed before the eyes of its occupants.  Located on the fragile hill slope of Kacchighat locality in the outer valley, the building was vacated by the local administration only hours before it came crashing down to the ground.

The Shimla municipal corporation had asked the families to vacate the property as soon as possible 15 days ago. Some families, however, has insisted on staying as they did not believe warnings about the building's potential collapse.

It appears that incessant heavy rains and landslides in the region had loosened the soil under the building, which was raised without a strong foundation. By the time the last of the resident families vacated their flats on Thursday, the building had already been titled sideways.

Six years ago the National Green Tribunal had put a cap on building height in Shimla at three stories keeping in view the dangers of collapse.

But there are still buildings with five to 12 storeys in the town, which is the capital of Himachal Pradesh. The town has already exceeded its carrying capacity.  Despite the evident risk to residents in the city, however, the state government has been contesting the NGT orders and demanding 'relief ' to building owners in the hill.