The incident occurred when Ram Shankar Katheria, who is also Chairman of National Commission for Scheduled Castes, was going to Etawah from Agra at around 03:52 am on Saturday. 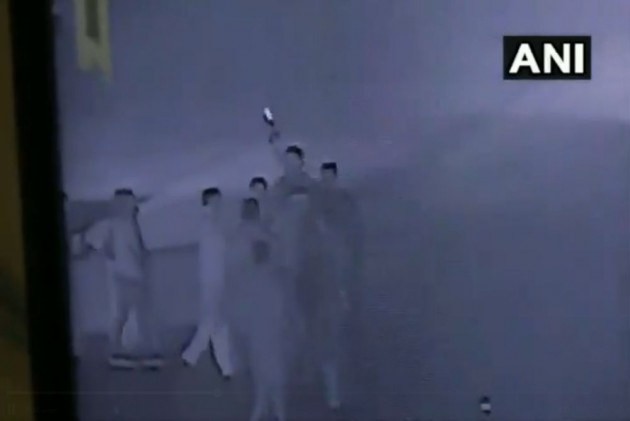 BJP parliamentarian Ram Shankar Katheria's security personnel on late Saturday night allegedly thrashed employees of a toll plaza and fired a shot in the air to intimidate them in Uttar Pradesh's Agra district.

The incident occurred when Katheria, who is also Chairman of National Commission for Scheduled Castes, was going to Etawah from Agra at around 03:52 am on Saturday.

The MP and his wife were also present at the spot during the altercation and a person could be seen taking the toll plaza employee by the scruff of his neck.

The footage also shows brandishing a gun and later firing in the air. One of the security personnel of Katheria pushed away an employee while the other fired shots in the air.

According to the complaint filed by toll employees, the convoy of Katheria consisted of five cars and a bus.

One of the toll employees who was beaten up told media, "One of our colleagues appealed to Katheria's convoy to move their cars one by one through the toll plaza to avoid any damage to the vehicles. But the security personnel didn't listen and started thrashing the employee on duty.

"One of the employees came to me and asked for help. When I came to the spot, they thrashed me with sticks and threatened to shoot with a gun. If anything happens to me in future, Katheria will be responsible as I am now I am being pressurised to quit the job."

Katheria's wife, who was present at the spot, tried to stop Katheria from thrashing us, the employee claimed.

However, the lawmaker claimed his security personnel were attacked by the toll plaza employees and they retaliated in "self-defence"

"My security did not attack toll plaza employees, they first attacked my people. Toll employees did not know other cars were part of my convoy; they thought some other car is slipping through behind mine. My security guard only fired in self-defence," Katheria told media.

The incident comes days after a BJP MLA, Aakash Vijayvargiya was arrested and subsequently granted bail after he thrashed a civic official with a cricket bat.

Days later, a Congress MLA,  was also caught on camera throwing muck on a civic official in Maharashtra.